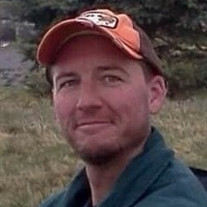 Jeremy Michael Gilsdorf was born on the snow flurry morning of September 9, 1971 at Poudre Valley Hospital in Fort Collins, Colorado and passed away on November 12, 2020 at his home in Fort Collins at the age of 49. Jeremy was creative, kind, and very much loved by his entire family. Jeremy was a loving father to his three children Catlain, Amanda, and Levi. He protected them with all his might and loved them unconditionally. He was a son to devoted parents Catherine (Pflipsen) and Thomas who always took care of him through good times and in bad times. He shared a bond with siblings Christina, Shawna, and Ashley. When Jeremy was two years old, the young family lived in Hawaii for 15 months while his father served in the Army. He enjoyed the beach every day, and his curly blond hair and outgoing personality attracted everyone on the beach. As a youngster while living in Thornton, CO Jeremys favorite spot was the open space behind his house where he spent countless hours riding his dirt bike and playing with many friends. At the end of the day, it was evident he had been very busy, as his mom could hardly scrub the dirt off of his tanned skin. Jeremy was active in Boy Scouts, Soccer, and Baseball, for all of which he enjoyed thoroughly and took many awards for. He absolutely loved throwing the softball around with his daughters in the backyard on a hot summer night while cooking up hamburgers for the whole family. He even used the same baseball mitt he used when he was a kid, later passing it on to his children. Jeremy was a Painter and Drywaller by trade, and a master at what he did. He brought his talents home and stopped at nothing to make the family's construction dreams look absolutely perfect. Jeremy and his sister Shawna were close in age, and were very close in general. As they grew up together they were there for each other no matter what, minus the time that Shawna stabbed his finger with a fork at the dinner table for attempting to hit her, which required stitches. They did most things together and had a bond that they couldn't find in anyone else. Not only were they siblings, they were also best friends. Shawna shares the fond memories of hanging out around the camp fire while playing cribbage and telling stupid stories that made them laugh until their stomach hurt and there were tears running down their faces. Jeremy enjoyed hunting, fishing, and camping with his brothers in law Rodney and Dustin. Since he was very young, Jeremy has very much enjoyed camping with family. There were many camping trips to Red Feather Lakes with his family and grandparents. There he enjoyed being on the lake with his raft and fishing at night with a lantern. Chambers Lake and Tunnel Campground were also the family's favorite camping spots. The mother to his children, Michelle, was also a very important person in his life. During their 26 years of marriage Michelle shares countless memories with Jeremy, but the one that stands out the most is "crowning" Chambers Lake as their special place, where they would one day take their children. Jeremy shared a lifelong passion for the mountains and outdoors, making memories there with his family. He loved to build fires, chop wood, and eat oysters (winky face). He was a fine painter and loved drawing cartoon faces with his kids when they were little, and of course imprinting them onto silly putty. Catlain shares the memory of hunting elk on the Natural Wildlife Reservation and geese at his grandparents farm. Amanda shares the memory of early morning fishing trips at Chambers Lake. Levi will always remember all the fun he and his dad had together. The family also shares memories of the 4th of July weekend, spending the day at Windsor Lake fishing, eating ice cream, and later watching the fireworks. In light of his early departure, his family will cherish all the memories they have created together, and continue to do the things that Jeremy loved most. Due to the COVID-19 pandemic, there was a private funeral service on Sunday December 13, 2020 at Saint Joseph Catholic Church with Father Joe Hartmann officiating. The family is planning on having a Celebration of Jeremy's Life in the late spring/early summer.

Jeremy Michael Gilsdorf was born on the snow flurry morning of September 9, 1971 at Poudre Valley Hospital in Fort Collins, Colorado and passed away on November 12, 2020 at his home in Fort Collins at the age of 49. Jeremy was creative, kind,... View Obituary & Service Information

The family of Jeremy Michael Gilsdorf created this Life Tributes page to make it easy to share your memories.

Jeremy Michael Gilsdorf was born on the snow flurry morning of...

Send flowers to the Gilsdorf family.