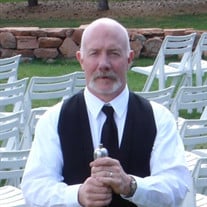 Jeff Rodney Armbruster passed away on January 7, 2020, at the age of 64. Jeff was born in Iowa to John (“Jack”) and JoAnn Armbruster on June 17, 1955. After moving to Colorado, Jeff attended Littleton High School where he excelled at track and football. Jeff met Su, his wife of 46 years, in 1973 and shortly after joined the United States Marine Corps where he served as a Microwave Radio Repairman and developed some life long friends. He was stationed at Twenty Nine Palms, CA, Biloxi, MS, Cherry Point, NC and served his final year in service at Camp Zuckeran in Okinawa Japan. He became a proud father, when his son, Mitchell was born in 1976. After his service, Jeff began working for Hewlett-Packard In Fort Collins and worked in the Hi-Tech Industry, as well as PODS units for over 40 years. While he worked full time he got an Electronics Technology degree and a Building Construction degree. In 2012 he graduated from Regis University Summa Cum Laude with a BS in Business Management. Jeff was active and a true Coloradan. He loved visiting Rocky Mountain National Park with his family, playing softball on his company team, riding his motorcycle, hunting, fishing, generally being outside, and don’t forget he was a life long hockey fan. A true animal lover, Jeff and Su adopted many dogs, cats and other creatures over the years. He enjoyed cold beer and hot coffee (cream, no sugar), and took pride in finding a great deal. Most recently, he was happiest being called Grandpa. Jeff is survived by his wife, Su; his son, Mitchell and his wife Jennifer, grandchildren Bryn and Cameron, sister June, uncle Harry, and a vast network of nieces, nephews, cousins and friends. Jeff will be put to rest during a private ceremony at Fort Logan National Cemetery with military honors. A celebration of Jeff’s life will take place on Saturday, January 18, from 11:00 am - 2:00 pm at CooperSmith’s Pub and Brewery (Pool Side; 5 Old Town Square, Fort Collins). The family invites you to join them for good food, good drinks, games and stories — just like Jeff would want it. In lieu of flowers, the family asks that you donate to the Pat Tillman Foundation https://pattillmanfoundation.org/donate or the Valley of the Sun Giant Schnauzer Rescue https://www.vsgiantschnauzerrescue.org

Jeff Rodney Armbruster passed away on January 7, 2020, at the age of 64. Jeff was born in Iowa to John (&#8220;Jack&#8221;) and JoAnn Armbruster on June 17, 1955. After moving to Colorado, Jeff attended Littleton High School where he excelled... View Obituary & Service Information

The family of Jeff R Armbruster created this Life Tributes page to make it easy to share your memories.

Send flowers to the Armbruster family.