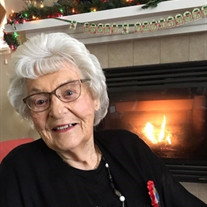 Jeanne Adelaide (Carter) Wells died on August 25, 2019 in Ft. Collins, Colorado. Jeanne, formerly of Parker, Lakewood, and Denver, Colorado was born in Crandon, Wisconsin on December 31, 1918. She was 100 years, seven months, and 25 days old. Growing up in the north woods she survived cold winters, pleasant summers, four brothers, the Great Depression, and even childhood scarlet fever. Jeanne graduated from Bellin Memorial Hospital College as a registered nurse in 1942, after three years of study. In that same year she followed her adventuresome spirit and answered the call to serve as an Army nurse during WWII. After training at Ft. Benning, Georgia, she received orders to sail to England. After brief duty in England, she was transferred to Bouhanfa Hospital in the North Africa campaign, arriving on December 6, 1942. After one year she was transferred to Italy and subsequently volunteered to serve at the 93rd Evacuation Hospital on the Anzio Beach Head. It was here that she survived several bombings of the hospital and received commendations. She shared a tent with another nurse. During a nighttime firefight over the hospital, she went out to see what was happening. Upon returning to her cot, she noticed that something was different. Upon further examination a chunk of shrapnel had ripped through the bedding. We have always thanked God for her curiosity. In 1944 Jeanne became gravely ill while serving Naples, Italy. She was sent home to attempt recovery from an unknown disease. It turned out that tuberculosis was the culprit. So it was off to Fitzsimmons Army Hospital in Denver to recover. It took all of two years to recover from the disease. It was in Denver that she met and married Lewis (Dusty) G. Wells in 1949. They started their family there and are survived by two daughters, Suzanne of Pensacola, FL and Judy Jo of Cody WY; and two sons, Robert of Mitchell, NE, and Russell of Ft. Collins, CO. Jeanne and Dusty were married for 55 years. Dusty died in 2003. She was blessed with 8 grandchildren and 14 great grandchildren. During her long, fruitful, and generous life she always enjoyed a travel adventure, and cherished time spent with her family and friends. A memorial celebrating Jeanne’s life will be held at 2 PM on Saturday, September 28, 2019 at Bohlender Funeral Chapel, 121 W. Olive St. Ft. Collins, CO.

The family of Jeanne A. Wells created this Life Tributes page to make it easy to share your memories.

Send flowers to the Wells family.