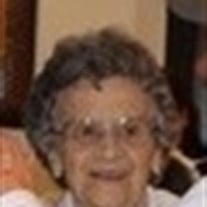 *****DUE TO POTENTIAL WEATHER THE MEMORIAL SERVICE FOR jEAN HAS BEEN POSTPONED UNTIL FRDIAY , MAY 14, 2021 AT THE LIVERMORE COMMUNITY CHURCH, 284 W. COUNTY RD 74E IN LIVERMORE, CO.******** Jean Elizabeth McGraugh (Crowe) was born October 30, 1923 in Gebo, Hot Springs County, Wyoming, the daughter of Gavin and Agnes Crowe-Johnstone and the sister of the late William Crowe and Azelda Rodda (Crowe). Jean grew up in Gebo and later attended high school in Thermopolis, WY. At 19, Jean joined an iconic and elite group of women called “Rosie the Rivetor.” (Maybe you’ve seen the posters…young woman, rolled up sleeves, bandana on her head, looking to rule the world). She moved to Fort Collins, CO and rode a bus to Cheyenne, WY where she replaced damaged panels of B-52 war planes after they received heavy fire, “riveting” the panels into place. She gave birth to Gloria Jean on February 5, 1947 in Thermopolis after moving back home. Jean moved back to Ft. Collins in 1969 to live closer to her daughter and her husband, the late Gerald “Jerry” Sheaman. Jean lived in a small home, approximately one mile down the road from where Jerry and Gloria lived in northern Ft. Collins. She lived there for many years and was known for her numerous walks, to and from her daughter’s house. (It was once believed that a marathon runner could not compete with the record time she’d make that journey, rain or shine). Gloria gave birth to Todd in 1973 and Jeff in 1976. Jean continued her walks back and forth from her house to help raise her grandchildren, who she adored. She was ALWAYS there for her grandsons, whether they were sick, celebrating birthdays, or just to be part of the family and gatherings. Jean was the absolute best mother and grandmother! As her grandson, there’s not a childhood memory that does not involve her. There is absolutely no childhood picture that doesn’t somehow include her. She loved having her grandson’s over for sleepovers. Before video games, before cellular phones…we made up games! Lid toss in a bucket!?!? Yes…plastic Tupperware lids tossed (like poker cards) into a bucket, at various distances. (Trust me it’s addicting). Jean was the world champion hands down! She traveled with one grandson via train (yes, train) from Denver to Salt Lake City, UT to see another grandson following surgery at Shriner’s Hospital. This was a 12-hour trip through a beautiful canyon, spent with Jean, an amazing woman!! So many memories from that trip (the fun, the tunnels, the laughs, first time eating cheesecake, etc.). She was extremely patient, even though she probably shouldn’t have been at times. (Especially with the hellions her grandchildren could sometimes be). There may have been an incident when one grandson tackled the other grandson…straight into and through a plate glass window. Jean quickly assessed potential injuries then was quick to put plastic over the void…only to be found by her daughter later in the day. (This obliviously didn’t fare well for the kids). As her grandson’s grew, Jean continued to be a fantastic grandmother and supporter of her family. She was so proud of her grandson’s activities. She once pushed her way into a high school boy’s locker room after her youngest grandson suffered a concussion following a wrestling match. Coaches and high school personnel would not allow her into the locker room with the numerous high school age kids showering and changing. She DID NOT care…she wanted to see her grandson and make sure he was okay. I specifically remember looking up from a bench and seeing her…asking “how did you get in her Gram, you’re not supposed to be in here!?” She would not leave my side, no matter what!!! Jean eventually moved further into Ft. Collins near City Park and continued her walks. Her walks would sometimes lead her to the hardworking men and women of Poudre Fire Authority (PFA) at station 2, just to drop off donuts and thank you cards and show her appreciation. Jean was a Christian and loved the bible. She enjoyed her sermons at church and her time spent in prayer. Jean eventually moved to a nursing home in southern Ft. Collins. She appreciated and looked forward to music night, when she could dance, whether seated in a wheel chair or being helped up to stand and “boogie.” In the end, Jean was unfortunate enough to be diagnosed with COVID-19. Nursing staff believed she would not survive. Jean fought it…at 97 years old, and beat it! She was always a fighter To sum up the life of Jean McGraugh, a few words come to mind…warrior, patriot, mother, grandmother, great-grandmother and an absolute perfect woman! You are so loved and will be missed! A Memorial Service will be held at 10:00 a.m. on Friday, May 14, 2021 at the Livermore Community Church, 284 W. County Rd. 74E, Livermore, CO. A Private Family burial of cremains will take place at Resthaven Memory Gardens Cemetery.

*****DUE TO POTENTIAL WEATHER THE MEMORIAL SERVICE FOR jEAN HAS BEEN POSTPONED UNTIL FRDIAY , MAY 14, 2021 AT THE LIVERMORE COMMUNITY CHURCH, 284 W. COUNTY RD 74E IN LIVERMORE, CO.******** Jean Elizabeth McGraugh (Crowe) was born October... View Obituary & Service Information

The family of Jean E. McGraugh created this Life Tributes page to make it easy to share your memories.

*****DUE TO POTENTIAL WEATHER THE MEMORIAL SERVICE FOR jEAN HAS...

Send flowers to the McGraugh family.