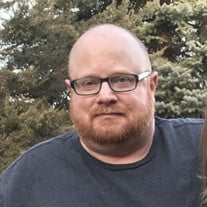 Jason Vern McCarthy (50) passed away of a heart attack Saturday, February 12, 2022 at his home in Fort Collins. He was born June 11, 1971 in Denver, CO, to John “Jack” and Shela (Lineback) McCarthy. He lived in Wheat Ridge, CO before moving to North Platte, NE with his family in 1977. Jason graduated from North Platte High School in 1989, then graduated with an Associate’s Degree in Heating & Air Conditioning Technology from Southeast Community College in Milford, NE. Jason was a gentle man of few words. He had a wicked sense of humor and an amazing memory. He often reminisced with his funny stories and unique way of seeing things. He was a big football fan, especially the Denver Broncos and Nebraska Cornhuskers. He loved to cook. He would wear his team shirt on gameday and make amazing appetizers and snacks to watch the game, with a remarkable ability to use every pan in the kitchen. He grew up learning to fish with his grandfather and namesake, Vern Lineback. He continued to enjoy fishing, hanging out at lakes and rivers with his friends and dog. Jason quietly struggled both physically and mentally throughout his life, but never complained. His close friends, family and dog made him happy. He was a gentle giant and a loving person. We will miss him terribly. Jason was preceded in death by his grandparents, Philip and Blanch McCarthy, Vern and Maudie Lineback; aunt Shirley Johnson, aunt and uncle Peg and Joe Emerson, uncle Bill McCarthy. He is survived by his parents, Jack and Shela McCarthy, his beloved dog, Scooter; sister, Dionne McCarthy all of Fort Collins; aunt and uncle Karen and Steve Tool of Windsor, CO; nieces Hannah Sexson and Mena Cozzola; cousins, Monica Cavender, Anna Cavender, Rhonda Baumer, Jody Naylor, Cassie Cervone, Tonya Malloy, Bud Johnson, Scott Emerson, Sandi Hammons, Shari Jones, Stuart Emerson. A celebration of life will be held Saturday, February 26, 2022, 2:00-4:00 pm at C.B. & Potts, 1441 E Horsetooth Rd, Fort Collins, CO 80525.

The family of Jason Vern McCarthy created this Life Tributes page to make it easy to share your memories.

Jason Vern McCarthy (50) passed away of a heart attack Saturday,...

Send flowers to the McCarthy family.