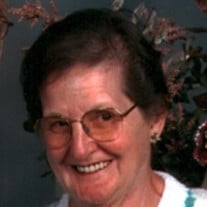 Janice L. Young, 84 passed away peacefully on Sunday, August 19, 2019 at Brookdale Alzheimer's facility. Janice was born December 15, 1934 in a home in Haxtun, CO. Her parents were Johannes and Dora (Roberts) Lindner. Janice was raised on a farm south of Fleming, CO. Janice went to the Lone Star schools. In school she enjoyed playing basketball, which she was good at. She also was a cheer leader for four years. Being the oldest she worked beside her Dad in milking cows, feeding the hogs, cows, sheep, chickens and turkeys. Janice met Waldo at a school dance. They were married August 25, 1951. From this union two children were born, Diane Mae Young in 1952 and Larry Waldo Young in 1954. Janice and Waldo resided with their family in Otis, Sterling and finally Fort Collins, CO. Janice was involved in all of the Lutheran churches where they lived. The longest at Shepherd of the Hills in Fort Collins, being a member over 40 years and the church circle Bible studies. She enjoyed attending Christian Business Women and Mobile Squares square dancing. Janice was employed by the food service at Sterling and Poudre-R-1 schools and retiring from CSU in 1989. For three summers she cooked at Sky Ranch Lutheran camp up the Pingree Park Road. And one years she cooked at the Girl Scout camp. Janice is preceded in death by her loving husband, Waldo C. Young in March 2019. Her parents, Johannes Lindner in 1982, and Dora Lindner Phipps in 1975. Janice had two sisters, of which, preceded her in death, Donna Ruth Lindner in 1945, and JoAnn Mae Van Velkinburgh of Denver in 2013. She is survived by her daughter, Diane Blake (Jerry) of Fort Collins; her son, Larry Young of Las Vegas, NV; granddaughter, Jennifer Blake of Hotchkiss, CO; and 6 great-grandchildren, Colten Chamberlain of Fort Collins, Tyrel Chamberlain, Sawyer Handy, Veda Handy, Oliver Handy and Kadence Hardin all of Hotchkiss,k CO. Also surviving is one niece Betty Scobee Fercking (Rod) and cousin, Danielle Fercking of Garden City, KS . A Memorial Service will be held at 1PM, August 31, 2019 at Shepherd of the Hills Lutheran Church. Janice's final resting place will be in Otis, CO next to Waldo.

Janice L. Young, 84 passed away peacefully on Sunday, August 19, 2019 at Brookdale Alzheimer's facility. Janice was born December 15, 1934 in a home in Haxtun, CO. Her parents were Johannes and Dora (Roberts) Lindner. Janice was raised on a... View Obituary & Service Information

The family of Janice L. Young created this Life Tributes page to make it easy to share your memories.

Send flowers to the Young family.