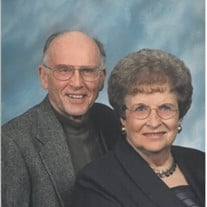 Janice Dale (Burns) Kendall passed away peacefully on June 10, 2022 at her apartment at Hillcrest Assisted Living in Loveland, Colorado. Janice was born on February 8, 1928 in Marion, Indiana, to parents Wayne and Elva Burns. A younger sister, Marna (Burns) Kiser, was born 2 years later. Upon graduation from High School, Janice enrolled in Marion Business College, and earned a degree in book-keeping. Later, she completed an Associate’s Degree in Sacred Music from Anderson College in Anderson, Indiana. Janice married Lawrence Eldon (Larry) Kendall on June 15, 1952. Following Larry’s service in the United States Air Force, he enrolled in Anderson School of Theology and became a pastor in the Church of God. Together, Larry and Janice pastored two congregations of the Church of God, first in LaJunta, Colorado, and then in Danville, Illinois, before returning to their home town of Marion, Indiana, where Janice finished her working years as an office manager at Pennington Appliance. Janice and Larry were the parents of three children: twin girls, LeRaye Gwynn (Cameron), and René Lynn (Main), born on January 18, 1956, and a son, Gregory Dean Kendall, born on April 6, 1957. Janice was an accomplished musician, vocally and as a pianist and choral conductor in the various churches they served. She also was a friend and mentor to many in Marion First Church of God where Larry and Janice attended for years. Janice was also an excellent cook, and passed on hundreds of delicious recipes to family and friends. Janice was a wonderful grandmother. She spent hours playing with, reading to, and doting on her grandchildren and great grandchildren. She was also quite a competitive game player, enjoying card games, board games, dice games, anything she could win! In retirement, Larry and Janice enjoyed some travelling, including trips to Germany, Switzerland, Ireland, Hawaii, Alaska, and a New England Fall Foliage tour, as well as their annual trek to the Church of God retreat at The Cove in North Carolina. Janice will be remembered as a woman of deep faith, a lover of God and others. She was preceded in death by her parents, Wayne and Elva, her husband of 69 years, Larry, her sister Marna, and a granddaughter, Keelia Main. She is survived by her children, LeRaye (Mark) Cameron, René (Dan) Main, and Greg (Becky) Kendall; four grandchildren, Keah Kendall (Steve) Redder, Tyler Kendall, Trevor (Hannah) Main, and Chelsea Kendall; and five great-grandchildren, Lydia Redder, Macy Redder, Henry Redder, Tabitha Main, and Hosea Main. A service of celebration for both Janice and Larry Kendall is being planned for Thursday, July 7, at 11am, at the Converse Church of Christ in Converse, Indiana.

Janice Dale (Burns) Kendall passed away peacefully on June 10, 2022 at her apartment at Hillcrest Assisted Living in Loveland, Colorado. Janice was born on February 8, 1928 in Marion, Indiana, to parents Wayne and Elva Burns. A younger sister,... View Obituary & Service Information

The family of Janice Dale Kendall created this Life Tributes page to make it easy to share your memories.