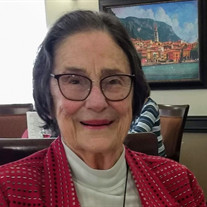 Janet S. Eyth, age 91, of Loveland, Colorado went to Heaven on July 13, 2020. Jan was born in Neligh, Nebraska in 1929. Jan graduated with a BS in History from the University of Nebraska, where she was a member of the Kappa Alpha Theta sorority and Mortar Board Society, and where she met & married Bill Eyth. After graduation they moved to Beatrice, Nebraska where they raised their 3 children: Cathy (Doug), Sally (Nick) and Tom. Jan was a wonderful mother who not only supported her children in their activities, but also served in many volunteer capacities in Beatrice. She was an avid golfer, bridge player and a member of PEO, Chapter Z. In 1980 Jan moved to Boise, Idaho. She continued to participate in her favorite activities – golf, spending time with friends and attending music concerts, PEO and church. She loved to travel and was always looking forward to her next “road trip” to see her children, grandchildren and friends. She was also fortunate to take many national and international trips. Her volunteer pursuits continued in Boise where she became a tour guide at the State Capitol. This led to her become the Supervisor for all government meetings that took place inside the capitol building between officials, citizens, lobbyists, etc. At age 80 she decided to retire. In 2017 Jan moved to Colorado to be closer to family, seeing them frequently, instead of once or twice a year. Her family will always be grateful for the care she received from the many “angels” at the Good Samaritan Village in Fort Collins. Jan is preceded in death by her parents, Cecil and Catherine Stratton; her sister, Jean Smith; and her former husband Bill. She is survived by her three children, 7 grandchildren, 3 great-grandchildren; two nephews Rick and Mike Smith of Boise, and her many, many friends in Nebraska, Idaho and Colorado. She will be missed, but her legacy will live on. If you wish to make a contribution in Jan’s memory, a donation to the PEO Foundation, which supports college education for women around the world, would be greatly appreciated. Or, you may choose to honor her with a donation to your favorite charity.

Janet S. Eyth, age 91, of Loveland, Colorado went to Heaven on July 13, 2020. Jan was born in Neligh, Nebraska in 1929. Jan graduated with a BS in History from the University of Nebraska, where she was a member of the Kappa Alpha Theta sorority... View Obituary & Service Information

The family of Janet S. Eyth created this Life Tributes page to make it easy to share your memories.

Send flowers to the Eyth family.