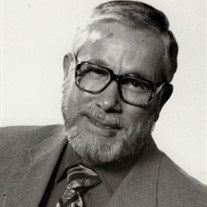 Professor Dr. James Elvis Ogg, former head of CSU's Dept. of Microbiology and resident of Ft. Collins for 61 years, died peacefully after his 95th birthday on 24 December 2019 in Ft. Collins, Colorado. Interment will be at the Fort Logan National Cemetery, where his wife of 46 years, Betty Jane Ackerson Ogg, was buried in 1994. Dr. Ogg was born December 24, 1924 in Centralia, Illinois to James and Amelia (Glammeyer) Ogg. James served 10 years in the United States Army and the US Army reserves during World War II and the Korean War. He was awarded several medals and ribbons for his military service including the Combat Infantry Badge, Bronze Star, and two battle stars in the European Theater of Operation in WW II; he also was part of the occupation forces in Japan. After taking advantage of the G.I. Bill to get a Bachelor of Science from the University of Illinois, where he met his wife Betty, he was recalled to active duty during the Korean War. He was stationed at Fort Detrick Biological Laboratories, Frederick, Maryland where he engaged in research, development, and production of biological weapons. He worked as a medical microbiologist for two years at the Fort Detrick Biological Laboratories after receiving his Ph.D. degree from Cornell University. Prof./Dr. Ogg joined the faculty of Colorado State University, Fort Collins, Colorado in 1958 where he spent most of his professional career in teaching, research, and administration. He is the author and coauthor of several publications in his fields of science and advised and directed the research activities of several students completing Master’s, Doctor of Philosophy, and Post-Doctoral requirements. He served 10 years as Head of the Department of Microbiology; 2 years as Assistant Dean of the Graduate School at CSU and a year as Director of Advanced Science Education at the National Science Foundation, Washington, D.C. Dr. Ogg was a member of several committees at CSU including one for organizing the U.S. Peace Corp. He participated in the training programs in clinical microbiology for members of the Corp. At various times he served as consultant to the Department of Defense, National Science Foundation, Lockheed-Martin (for the development of SkyLab), and as a Star Consultant in genetic engineering for the UNDP in China in 1985. Dr. Ogg was a member of various professional and honorary societies; a Fellow of the American Academy for Microbiology and the American Association for the Advancement of Science. He was awarded two Fulbright-Hays Senior Lectureships to teach and do research in microbiology in Nepal where he established that country’s first microbiology department. His biography appears in various Who’s Who and 2000 Outstanding Scientists of the 20th Century. In 1994, Dr. Ogg established a scholarship for needy students as a memorial to his wife Betty at Keuka College, Keuka Park, New York. He was a member of the 1870 club at Colorado State University. He made substantial donations to Respite Care, Inc., The Family Center/La Familia, and the Trinity Lutheran Church Preschool of Fort Collins, CO. He was a supporter of two native American Indian schools in Montana and South Dakota. Dr. Ogg served as a Scoutmaster for Boy Scouts troop in Walkersville, Maryland and a troop in Fort Collins, Colorado, showing his love of the outdoors and the education of youth. He was also active in many volunteer community endeavors such as the United Way of Fort Collins; the Aspen Club, Senior Services Poudre Valley Health Systems and the State of Colorado Senior Health Assistance Program trained Counselor for Medicare, Medicare Health Maintenance Organizations and Long Term Care Insurance; Instructor for the AARP Driver Safety Program; and a member of the Fort Collins All Services Honor Guard. His hobbies included genealogy (both customary and genetic), reading, and traveling. Dr. Ogg always believed in education and was generous to both his children, their sons, and even members of his extended family in their pursuit of higher education, attending most of their graduation ceremonies. Because he was the only one of his family to both attend college and get an advanced degree, family members turned to him for wise advice. He is remembered for the life stories he would tell, eventually compiled with the help of his daughter Susan into a book, No Regrets: A Memoir by Dr. James E. Ogg. Dr. Ogg and Susan were working on a book about aging when he died. Dr. Ogg also loved the outdoors and travel and helped his son Jim with geology fieldwork during his retirement. His son, James George Ogg, is currently a professor of geoscience at Purdue University (Indiana), and his daughter, Susan Kay Michon, is currently an IT specialist with the Irvine Unified School District (California). His grandsons are Yasha and Nickolas Ogg (Cincinnati and Seattle) and Thomas and David Michon (both at Redmond, WA). His surviving sibling is Raymond H. Ogg of Littleton, Colorado. Donations in honor of Dr. James E. Ogg can be made to The Family Center/La Familia of Larimer County (https://thefamilycenterfc.org).

Professor Dr. James Elvis Ogg, former head of CSU's Dept. of Microbiology and resident of Ft. Collins for 61 years, died peacefully after his 95th birthday on 24 December 2019 in Ft. Collins, Colorado. Interment will be at the Fort Logan National... View Obituary & Service Information

The family of James Elvis Ogg created this Life Tributes page to make it easy to share your memories.

Send flowers to the Ogg family.