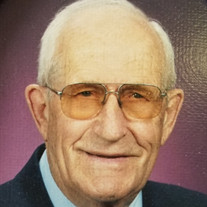 James B. McBeth, 103, passed away on March 19, 2021, at Collinwood Assisted Living in Fort Collins, Colorado. He was born January 12, 1918 near Shelby, Nebraska, the son of Charles McBeth and Marguerite (Younker). James graduated from Osceola High School in 1937 and married his high school sweetheart, Ruth (Heckman) in 1939. They celebrated 81 years of marriage last June. James farmed for 18 years in Polk County Nebraska and then decided there “had to be a better way of making a living” and in 1957 he moved his family to Fort Colllins. He worked for Ideal Cement Plant until his retirement in 1981. James’ greatest enjoyment in life was his family, particularly his grand and great grand-children. Family trips and playing together always brought a smile to his face. After his retirement James and Ruth enjoyed many years of RV travel, wintering in Harlingen, Texas with square dancing, and trips to Alaska, Hawaii and Mexico. Surviving in addition to his wife, Ruth, of Fort Collins are his children: Donna Sowell (Jim) Lincoln, NE; Larry McBeth Aurora CO; Linda Fuhrman (Roger) Casper, WY; and Mary Zimpfer (Jerry) Littleton, CO; as well as numerous grandchildren, great grandchildren and great-great grandchildren. James has two surviving siblings, Lloyd McBeth of Santa Clara, CA and Arlene Johnson of Lincoln, NE. James was preceded in death by his parents, 3 of his siblings: Charles, Virginia (Tipton), Don: and his granddaughter Katie Zimpfer. Visitation will be held from 5 to 7 PM on Friday, March 26 at the Bohlender Funeral Chapel in Fort Collins. Interment will be March 27 at Resthaven Memorial Gardens. Those who wish to remember James in a special way may make gifts in his memory to The Crohn's & Colitis Foundation. You may view the live stream of the funeral service beginning at 11 a.m. on Saturday, March 27, 2021 here on James' obituary page.

James B. McBeth, 103, passed away on March 19, 2021, at Collinwood Assisted Living in Fort Collins, Colorado. He was born January 12, 1918 near Shelby, Nebraska, the son of Charles McBeth and Marguerite (Younker). James graduated from Osceola... View Obituary & Service Information

The family of James B. McBeth created this Life Tributes page to make it easy to share your memories.

Send flowers to the McBeth family.