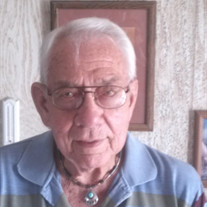 James “Jim” Eugene Barrett, age 87, passed away peacefully in the comfort of his home, surrounded by family, on January 26, 2020. Jim was born in Miller, South Dakota, on June 18, 1932, to David and Faye (Bohen) Barrett. Jim had one sister, Harriet (Barrett) Lawler, who preceded him in death. He was also preceded in death by the love of his life, and wife of 55 wonderful years, Charlotte (Diede) Barrett, whom he married on June 27, 1954. In 1969, they relocated their family to Fort Collins, Colorado. Jim was a true family man and is survived by four daughters: Cynthia Barrett, Rebecca Barrett, Susan Taylor, and Sheila Barrett; two granddaughters: Kelly Taylor and Tracy Thompson; and two great-granddaughters: Lily and Lola Padilla, whom Jim described as the “most fun” part of his long and full life. Jim was an honorably discharged veteran of the United States Air Force and recipient of a National Defense Service Medal. His family will miss him more than words can express. He was a wonderful and loving son, husband, father, grandfather and great-grandfather.

The family of James Eugene Barrett created this Life Tributes page to make it easy to share your memories.

Send flowers to the Barrett family.