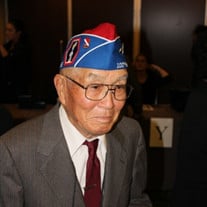 Matsuo “Jack” Tominaga was a loving husband, father, grandfather, and friend. He died at the age of 97 on April 21, 2021. Jack was born to Daijiro Haro and Nobu Tominaga on Jan. 4, 1924, in Shelley, Idaho, and he had six brothers and three sisters. He went on to serve in World War II in the distinguished and highly decorated 442nd Regimental Combat Team. It was a Japanese American infantry regiment with the motto “Go for Broke”— and in 2011 they were awarded the Congressional Gold Medal in a ceremony in Washington, D.C. On the flight to D.C., the pilot shook Jack’s hand and thanked him for his service. The passengers applauded when they learned he was on board, though he napped through the fanfare. His name, along with that of his four brothers who also served in WWII, is engraved in the Memorial Park in Pocatello, Idaho. His service is also commemorated at the Veterans Plaza in Spring Canyon Park in Fort Collins, Colorado, and the Go For Broke Monument in Los Angeles, California. He married the love of his life, Toshie “Betty” Nishioka, on Jan. 18, 1951. They celebrated their 70th anniversary in January. They raised three children on a farm in Blackfoot, Idaho, where they grew potatoes, raised Hereford cattle, and had a series of dachshunds all named Sammy. He loved to ride his horse and check on the cattle, especially in the spring when they were calving. He won numerous awards for the quality of his potato and sugar beet crops, and he used the award money to take his family on trips to Disneyland. Because Jack was unable to finish his own education, he prioritized education for his children. He encouraged his children (and grandchildren) to seize every opportunity to expand their knowledge. Jack and Betty put their children through undergraduate, graduate, and medical school. They sold cattle when the kids needed extra money and used horse trailers to move them to their various colleges across the country. Despite the prejudice he faced as a Japanese American, and the challenges he faced as a farmer, he never complained or held a grudge. He was quiet grace. Jack enjoyed simple pleasures: secret gas station ice cream cones (and forgetting to wipe the chocolate evidence off his chin), quiet naps in the potato fields under the Idaho sky, and boisterous card games with his children, grandchildren, and friends. His one extravagance was a diamond ring he wore proudly when he played cards. Jack drove other seniors to play bridge at the Blackfoot Senior Citizens Center. He was a devoted member of the Jason Lee Memorial United Methodist Church in Blackfoot, as well as a lifetime member of the Pocatello-Blackfoot Japanese American Citizens League (JACL). In 2015, he and Betty moved to Fort Collins to be closer to their daughter Jacquelyn. He is survived by three children: Bruce Tominaga in Sandy, Utah, Dr. Julie Tominaga (Dr. Kevin Coulter) in Davis, California, and Jacquelyn Niedringhaus (Scott Niedringhaus) in Fort Collins. He is also survived by five grandchildren: Kiera Coulter, Dr. Andrew Tominaga, Katie Tominaga, Cassa Niedringhaus, and Elise Niedringhaus. He was laid to rest in a private ceremony due to the pandemic, and the family thanks everyone for their kindness during this time. In remembrance of Jack’s life, consider making a donation to the Blackfoot (Idaho) Jason Lee Memorial Methodist Church www.umoi.org/churchdetail/350394 or the National Veteran’s Network www.nationalveteransnetwork.com whose mission is to preserve, educate and advocate how the Japanese-American World War II soldiers’ loyalty, courage and patriotism embody American values and shape future decisions about justice and equality in our democracy.

The family of Jack M. Tominaga created this Life Tributes page to make it easy to share your memories.