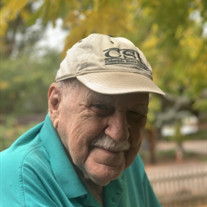 Jack C. Hale, 89, passed away peacefully on March 29, 2022 at his home in Loveland, CO. Jack was born August 26, 1932 in Hardesty, Oklahoma, the youngest of 9 children, to Horace David and Ella (French) Hale. Born in the Oklahoma Panhandle in the midst of the Dust Bowl and Great Depression, Jack was resilient, determined, grateful and generous. Jack loved basketball and could tell you the score, fouls and pertinent facts about most games he had ever played, coached, or watched. In the weeks before he passed away, he was cheering on his CSU Rams at the 2022 NCAA tournament. Jack graduated from Hardesty High School in 1950. He attended college at Panhandle State College, playing basketball. There he met the love of his life, Barbara Southern, the sister of his roommate and teammate, Arlen Southern. On his 21st birthday, Jack and Barbara were married in Hooker, OK and were never separated until Barbara’s death in 2018. He graduated with a degree in social studies and taught and served as basketball coach in Meade, KS. They moved to Ft. Collins in 1963 when Jack became a teacher placement director at Colorado State University. A school administrator for almost 50 years, Jack served as principal at Fort Collins High School, Superintendent at Windsor RE-4 School District, Thompson School District in Loveland, and Executive Director of Centennial and Larimer County BOCES. Jack lived a long, full and meaningful life. He cared for his beloved Barbara though her long journey with dementia. His devotion to her was an inspiration to his family. Jack and Barbara loved traveling, including trips to France, Russia and Cuba. After the death of their daughter, Jennifer, in 1983, they found solace and peace in Hawaii, and for over 25 years, they spent part of each winter on Maui. They loved sharing this experience with their children and grandchildren, hosting many happy family vacations. Jack and Barbara were Rockies fans from the inaugural season, making sure that grandchildren enjoyed games with them each summer. They never missed a grandchild’s school program, award ceremony or game. The annual summer family trips to Glenwood Springs continue today, with great-grandchildren making memories. Surviving are his daughter Jacqueline (Lelyn) Larson of Gill, CO; son Jeffrey (Elizabeth) Hale of Fort Collins, CO; grandchildren John (Michelle) Larson of Gill, CO, Jennifer (Casey) McDaniel of Burlington, CO, Elisabeth (Cody) Peterson of Gill, CO, Grant (Daisy) Hale of Fort Collins, CO, and Drew Hale of Fort Collins, CO; and nine great-grandchildren: Luke, Jack and Malin Larson, Brandon, Hailey and Owen McDaniel, Madelynn and Cole Peterson, and Olivia Hale. He also leaves sister-in-laws Beth Southern of West Chester, PA; and Anne Hale Doebbeling of Ness City, Kansas, along with several nephews and nieces. Jack’s family thanks his wonderful caregivers, including Kathy Wible and Shari Ortivez, whose loving care enabled Jack to remain at home. The family also wishes to thank the staff at Pathways Hospice and Palliative Care. Memorial gifts may be given to Pathways Hospice and Palliative Care or the Keawala’i Congregational Church in Makena, HI in care of Bohlender Funeral Chapel in Fort Collins, CO. True to their wishes, a celebration of life for both Jack and Barbara will be held May 27 at Resthaven Memory Gardens, 8426 US 287, Ft. Collins, CO. A graveside service, officiated by Jack’s nephew, Randy Littlefield of Wichita, KS, will be held at 11:30 a.m., immediately followed by a reception and meal celebrating the lives of two very special people.

Jack C. Hale, 89, passed away peacefully on March 29, 2022 at his home in Loveland, CO. Jack was born August 26, 1932 in Hardesty, Oklahoma, the youngest of 9 children, to Horace David and Ella (French) Hale. Born in the Oklahoma Panhandle... View Obituary & Service Information

The family of Jack Coe Hale created this Life Tributes page to make it easy to share your memories.

Send flowers to the Hale family.