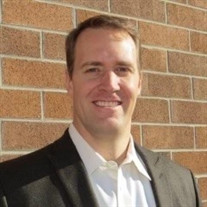 Jack Borrett He ran the race and finished the course with grace and humility. Jack C. Borrett was born May 19, 1976, and raised in Fort Collins, Colorado. After graduating from the University of Nebraska-Lincoln (brainwashed by his dad that there was no place like Nebraska), he worked a short time with Sofa Mart as a store manager. After living in Lincoln, NE, Flint, MI, Denver, CO and Springfield, MO Jack realized that there was no better place to live than in Northern Colorado. He joined his dad, Ken Borrett, selling insurance to churches for Brotherhood Mutual. What a gift for both of them to work together. Jack had just taken over Ken’s book of business when Ken retired last January. A highlight for Jack was participating in giving his dad a memorable retirement feast with beautiful tributes by him, his brother Tad Borrett, Dan Book Vice President of Marketing for Brotherhood Mutual and John Korsmo owner of American Church Group of Colorado-Wyoming. Faith, family and friends were Jack’s priorities while Nebraska football games, jogging, golfing and fantasy football competitions with friends were his passion. As a tall, gentle giant (6’7”), with a ready smile, a resounding laugh and deep bass voice, he never needed business cards to be remembered by. After dealing with seizures throughout his life, Jack passed on June 11, 2022, from one. He is now free from epilepsy. Jack is survived by his parents Ken and Kay Borrett of Fort Collins, CO; brother Tad (Tammie) Borrett of Severance, CO; nephews Ryan (Kaitlyn) Borrett of Greeley, CO; Jeff Borrett of Kansas City, MO; niece Lauren Borrett of Severance, CO; two great nephews Kenny and Miles Borrett of Greeley, CO; Uncle Dean Anderson of Fort Collins, CO; Aunt Kay Nelson, cousins Susan Hayward and Joel Nelson all of Colorado Springs, CO. Visitation will be Thursday June 16, 2022, at Bohlender Funeral Chapel, 121 W. Olive St., Fort Collins, CO from 9am – 4pm. A memorial service will be Friday June 17, 2022, at Timberline Church, 2908 S. Timberline Rd., Fort Collins, CO at 2:00pm. A cookie and coffee reception will follow. In lieu of flowers, contributions may be sent to Epilepsy Foundation-NORD (National Organization for Rare Disorders) 8301 Professional Place, Landover, MD 20785-7223.

Jack Borrett He ran the race and finished the course with grace and humility. Jack C. Borrett was born May 19, 1976, and raised in Fort Collins, Colorado. After graduating from the University of Nebraska-Lincoln (brainwashed by his... View Obituary & Service Information

The family of Jack Christopher Borrett created this Life Tributes page to make it easy to share your memories.

He ran the race and finished the course with grace...

Send flowers to the Borrett family.