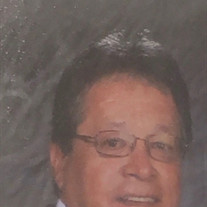 Henry E. Solano passed away unexpectedly on Friday, June 19, 2020. Henry was born on May 17, 1950 to Albert and Mary Solano. He was the oldest of eight children. At the early age of 21, Henry married his best friend, Candace (Candy) Solano. Together, they started their family, to which Henry dedicated his life to love, cherish and provide. Henry and Candace epitomized the term “life partners” and have honored one another through their 48 years of marriage. Henry is survived by his wife, Candace (Candy) Solano; three daughters: Stacy Wagner (Marc Wagner), Amber Solano (Bryan Smith), and Sierra Solano (Lee Espinoza); eight grandchildren: Jeremiah, Jordan, Brooks, Alexis, Gabriella, Benjamin, Madison, and Ava; three brothers: Steve, Albert, and Laurence Solano; and three sisters: Delores Kintzley, Vina Solano, and Anna Kintzley. He is preceded in death by his parents and brother, Tony Solano. Henry attended Holy Family Parochial School, Lincoln Junior High School, and graduated from Poudre High School Class of 1968. He attended Colorado State University before being initiated into Pipefitters Local 208, where he was a member for 47.5 years. In 1991, Henry was elected and sworn in as a Business Agent for Local 208. He served in that capacity for 11 years before being elected to Business Manager. Henry held this position for nine years before retiring from office in 2011. Henry was a dedicated member of Local 208 and was instrumental in expanding many of the programs in place today. He took pride in developing apprentices, expanding educational opportunities for aspiring pipefitters, and helping young men and women find their way into the construction trades. To Henry, family was the most important thing in his life. He loved being involved with his daughters’ activities, especially athletics. He coached his three daughters in Buckaroos Fastpitch Softball for many years, as well as being on the Board of Directions and ascending to President. Henry’s deep love for his daughters continued through their children. Henry spent countless hours with his grandchildren, particularly watching them perform on the athletic fields, where he became well acquainted with snack bar operators nationwide. When he was not spending time with his grandchildren, Henry was an avid golfer and fisherman. He was a member of the Fort Collins Senior Golf League. Henry was a devoted friend who would give the shirt off his back to anyone in need. Henry leaves a legacy of love, loyalty, and admiration with his family and those who knew him. He has left behind wonderful memories as a husband, father, grandfather, brother, and friend. We will miss him more than words can express. A Celebration of Life will be held outdoors on Thursday, June 25, 2020 at 2:00 pm at the Fort Collins City Park North Ball Field, located at 1500 W Mulberry St, Fort Collins, CO. Please dress casual as if you are going to a ball game or to play golf. And, don’t forget your face mask. Directions 1. From I-25 exit 269B, west on Mulberry St (5.2 miles) to Jackson Ave. (Careful, at about 3.3 miles, Riverside Ave heads northwest, continue straight on Mulberry St) 2. North (right) on Jackson Ave (.3 miles) to Oak St. 3. West (left) on Oak St (.5 miles) to the baseball fields.

Henry E. Solano passed away unexpectedly on Friday, June 19, 2020. Henry was born on May 17, 1950 to Albert and Mary Solano. He was the oldest of eight children. At the early age of 21, Henry married his best friend, Candace (Candy) Solano.... View Obituary & Service Information

The family of Henry E. Solano created this Life Tributes page to make it easy to share your memories.

Send flowers to the Solano family.