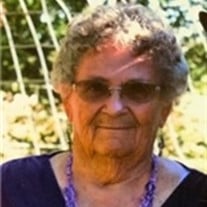 Helen Delores McGregor was born in Lamar, Colorado on November 7, 1935 to Carl and Bernice DeWitt. (Known to everyone as Delores or Dee.) At the age of 84, after a fight with Cervical cancer she passed on June 12, 2020. As a young girl Dee’s family moved from Lamar to the Old Lady Moon Ranch in Red Feather where she grow up. At the age of 16 she meet Paddy McGregor at a dance at DAV Lodge Dowdy Lake as he had just returned from the serving in Korea. On September 11, 1953 Dee and Paddy had to buy her a pair of shoes, so that they could elope. In February of 1954, Dee and Paddy moved to New Castle, Wyoming were Cheryl and Bobby were born. Then in 1955 they moved back to Bellevue, Colorado. In 1959 they welcome Patrick to make their family complete. Moving to different locations in Northern Colorado Dee raised a great family while putting in 20 years at the Poudre School District as a cook, bus driver, and dispatch. She also was a defensive driving instructor and help the with Poudre School District “I Walk Safety Program.” Dee won several awards in the Bus Driver’s Rodeo. She also played softball and was on a bowling league. One of the most important things that was near and dear to Dee’s heart was being a lifetime member of the American Legion Ladies Auxiliary, serving as president for several years and the VFW. Anytime or anything she could do to help the veterans was very important to her. Once Dee and Paddy retired, they started their travels to Arizona and enjoy time with their 7 grandchildren. Dee and Paddy would spend their winters in Arizona and summer’s in Colorado or traveling to many sites that wanted to see. Summertime in Colorado Dee loved spending time with the grandkids going camping, fishing, enjoying caring for her flower or just visiting with them and eating ice cream. She even took them to the Colorado Rockies games, one of her favorite sports to watch. She always tried to go to the grandkids events from watching them play sports, dances, or even complete with them at the Larimer County Fair. She continued that with some of the 20 great grandchildren that are in the area. In one of Dee and Paddy’s trips to Arizona so was shown how to do bead work, which then became her passion. Dee made anything she could figure out a pattern for, from bags, earrings, necklaces, to her memorable beaded ornaments. She donated flag ornaments to in shadow boxes with the memories of pass, present, and future veterans that will never be forgotten, to American Legion, VFW, and the VA Clinic in Fort Collins. Delores is survived by her husband of 66 years Paddy McGregor. Daughter Cheryl (Rob) Kisner, Sons: Robert “Bobby” McGregor, & Patrick “Pat” (Lori) McGregor. 7 Grandchildren and 20 Great Grandchildren with one on the way making 21 total. Delores is proceeded in death with her parents Carl & Bernice DeWitt, Brother Jack DeWitt, In-Laws Doc & Fern McGregor, & Grandson Robert Kisner Jr.

Helen Delores McGregor was born in Lamar, Colorado on November 7, 1935 to Carl and Bernice DeWitt. (Known to everyone as Delores or Dee.) At the age of 84, after a fight with Cervical cancer she passed on June 12, 2020. As a young girl Dee&#8217;s... View Obituary & Service Information

The family of Helen Delores McGregor created this Life Tributes page to make it easy to share your memories.

Helen Delores McGregor was born in Lamar, Colorado on November...

Send flowers to the McGregor family.