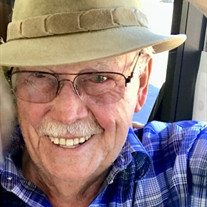 Heinrich “Heinz” Wilhelm Christmann, 95, peacefully passed away surrounded by family on March 14, 2022 in Windsor, Colorado. Heinz is survived by his wife of 15 years, JoAnn Sloan Christmann, his 3 daughters, 11 grandchildren, and 13 great grandchildren. Born as the eldest of 5, on January 2 1927, in Unna, Germany. Heinz immigrated to California in 1959, with his wife Gerda, and daughters Erika, and Ursula. Barbara was born thereafter, along with what would be a 40+ year business, “Trophies & Engraving Shop” an artistic landmark in the San Mateo community. Heinz was a master hand engraver, creating works of fine jewelry and commemorative plaques, bringing joy to countless people over the long history of their business. Having trained in Germany, he was one of few remaining hand engravers living, and completed works for many dignitaries including Shirley Temple Black, Queen Elizabeth, and Nobel Prize winner Anwar Sadat. Heinz embodied the American dream, and truly believed that one could achieve anything with discipline and hard work. He loved Western movies, driving the coast of California, landscaping with the greenest of thumbs, and was filled with determination, vision, and a zest for life. Heinz loved to sing! He sang with German & Barbershop choirs, and also loved big band music. Years after Gerda passed away, Heinz moved to Colorado, engaging the same courageous spirit that brought him to the U.S. Heinz was an elegant & dignified man, and despite self-doubt of forever being seen as the immigrant, his heart was as generous as they come. He was a great judge of character, his instincts were spot on, and he possessed the boldness to act on those instincts, in the right timing. It was that ability that brought him to America & later Colorado. A new chapter began when Heinz met JoAnn, married, and together they drew as much out of their life as possible. This union gave Heinz a supportive & loving expanded family, through his daughter-in-laws Shelley and Debbie, and their extended family of strong and accomplished husbands & sons. Heinz traveled to Germany regularly throughout his productive and fruitful life. He stayed in touch with his roots, family relations, the beauty of nature there; and loved to drive on the autobahn! The epic cars he owned expressed both his American freedom, and pride for German craftsmanship. He was physically tall & spry, and naturally athletic. Soccer was Heinz’s passion, having played for his city team in Germany. He & JoAnn returned to Unna in 2009 for a reunion of his Soccer teammates. He shouted at the TV with the Bundesliga, and was a true American football fan. Heinz possessed the gift of humor, which he used to engage others throughout his life. His generosity & humor was strong until his last days; piercing through the veil of Alzheimer’s, to always help others to feel comfortable. What an exceptional man. A boy in wartime Germany, who became a master artist, and took a bold leap to America to build a better life for his family. We are incredibly thankful for the exceptional life of beloved Heinz who opened up a world of opportunities for future generations of the Christmann Family, and touched countless hearts with his gifts, humor, and remarkable life story. The memorial service for Heinrich “Heinz” Wilhelm Christmann will be held at 11am on Tuesday, April 19th, 2022, at the Redeemer Lutheran Church in south Fort Collins. In lieu of flowers, memorial contributions in Heinz's honor can be made to Pathway's Hospice.

The family of Heinrich Wilhelm Christmann created this Life Tributes page to make it easy to share your memories.

Send flowers to the Christmann family.