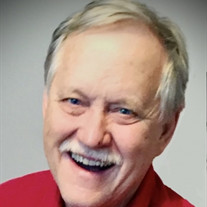 Glenn Gordon Simmons, 75, of Rustic, Colorado, died on March 5, 2022 in Fort Collins, Colorado after a year long battle with pancreatic cancer. Glenn was born on August 30, 1946 in Spokane, Washington. After moving to Hays, Kansas he later graduated from Hays High School(1964), Fort Hays State University(1968) B.A., (1971) M.A. and (1995) M.F.A., earning degrees in Psychology, Sculpture and Jewelry Design. In 1972 Glenn married Jan Busch in Russell, Kansas . A daughter Gina was born in 1981. He and Jan were successful owners of two long term (30 yrs) businesses in Hays- Tattered Covers (downtown ) and Gulliver’s Book Store and coffee shop located in the Hays Mall. While in Hays he was a member of the Hays Chamber Commerce, The Ambassador’s Club , the Kiwanis Club and the FHSU President’s Club A love of the Poudre River and the mountains in Colorado lured Glenn and Jan to follow their dreams and live a quieter life in 2002. On riverfront acreage they built a log home, where Glenn finished the interior complete with an art studio. There Glenn pursued his passion of jewelry design, carving and casting precious stones and metals. He belonged to the Colorado Metalsmithing Association and the Society of North American Goldsmiths. In 2019, Glenn won a prestigious award from the National Halstead Jewelry Design Competition. For 15 years Glenn was a Volunteer Wildland firefighter and licensed EMT serving the Poudre Canyon Community. He had many lasting friendships in the Canyon and was a member of the Upper Poudre Canyon Association and the Poudre Canyon Chapel. Glenn is survived by his wife Jan of the home, daughter Gina Rocha and son-in- law Clint Rocha, Paola, Kansas, two granddaughters, Olive and Amelia Rocha, a sister, Sheryle Robinson, Sedona, Arizona and a brother, Ron Simmons, Hays, Kansas and many nieces and nephews. Glenn was preceded in death by his parents, Gordon and Vey Simmons, father and mother in -law Carl and Cornelia Busch, brother-in-law Greg Robinson and grandmother Nelly Harshbarger. Condolences and memories may be sent to the Bohlender Funeral Chapel, Fort Collins, Colorado. Memorials are suggested to the Poudre Canyon Fire Protection District. Poudrecanyonfpd.Colorado.gov A private family service will follow at a later date.

The family of Glenn Gordon Simmons created this Life Tributes page to make it easy to share your memories.

Send flowers to the Simmons family.