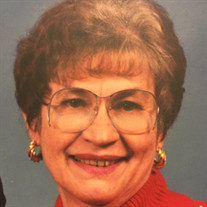 Gertrude Rachel (Heideman) Larzalere, 85, passed away peacefully Wednesday morning, October 4, 2017, at Columbine Commons Health and Rehab Facility, Windsor, Colorado with loving family members by her side. Gert was born on November 18, 1931, in Seneca, Kansas, the daughter of Frederich and Laura (Blocker) Heideman. She was the seventh of their nine children: Richard, Lawrence, Leona, Herb, Mary, Dorothy, Joan, and Freddie that were raised on the family’s farm outside of Seneca. She married Robert Larzalere in 1953. Together they shared 58 years of marriage until his death on April 26, 2011. They lived in Hays, Kansas until 1963 when Bob was transferred to Iola, Kansas. In 1974 Bob retired from the Kansas National Guard, began his second career as an Air Traffic Control Specialist, and the family moved to Trinidad, Colorado. Gert was a homemaker extraordinaire. Her skill as a cook was publicly recognized when she won third prize in a Campbell’s Soup contest for an original recipe she had created. She was also a skilled seamstress making clothes for her four daughters throughout their professional careers. While in Iola Gert also made costumes for many of the productions of the community theatre. After the girls left home she turned to quilting, creating special quilts for all of the children and grandchildren. Gertrude had a quick wit and a natural ability to write, which was proven when a story of hers was published in Reader’s Digest “Laughter is the Best Medicine”. Gert and Bob moved to Fort Collins, Colorado to live closer to their children after his retirement in 1988. They were active with the Fort Collins Corral of Westerners International and formed many deep friendships. Survivors include her daughters: Jeanne (Jonathan) Bloom of Chicago, IL, Marie (Klaus) Krizanovic of Fort Collins CO, Linda (Rick) Bohn of Trevor, WI, and Laura Carter of Centennial, CO; son: Charles (Denise) Larzalere of Austin, TX; grandchildren: Nicholas Larzalere, Brett Larzalere, Brandon Krizanovic, Jordan Krizanovic, Kyle Carter, and Kaitlen Carter; brothers: Herb and Freddie; sister, Sister Dorothy Heideman, OSB. She was preceded in death by her parents; husband, Robert Larzalere; brothers: Richard and Lawrence Heideman; sisters: Leona Conwell, Mary Cooper, and Joan Wenger. A rosary prayer service will held at 10:00 a.m. on Monday, October 9th, 2017 at Saint John XXIII, 1220 University Avenue in Fort Collins. The funeral mass will follow immediately after at 10:30 a.m. Interment will be at Grandview Cemetery. Bohlender Funeral Home is assisting the family with arrangements. For those who prefer, memorials may be made to The Mount Legacy Society (801 South 8th Street, Atchison, KS 66002). The Society assists in the care of the elderly sisters of the Benedictine Sisters of Mount St. Scholastica.

The family of Gertrude Rachel Larzalere created this Life Tributes page to make it easy to share your memories.

Send flowers to the Larzalere family.