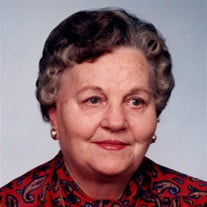 Gertrud Hoffmann, 98, passed away on December 16, 2017 at Centre Avenue Health and Rehab in Fort Collins. Gertrud Kellner was born and raised in Goettingen, Germany and had 5 siblings. She married Bruno Hoffmann in 1942. They had two children, Brigitte and Bernd. Brigitte died tragically at age four in a sledding accident. In 1953, Gertrud and Bruno immigrated to the United States with their son Bernd and settled in New Jersey. Her first job was at The National Musical String Company in North Brunswick, New Jersey a difficult job where she got bloody fingers hand winding guitar strings. She then became a beautician and later, with a friend opened the Queen City Academy of Beauty Culture, quite an accomplishment for someone starting life in a new country and having to learn to speak English. Gertrud enjoyed crocheting, knitting, and music, especially opera, and she could often be heard singing along when music was playing, especially if they were German songs. She also had an interest in gemstones and liked to watch the jewelry shows on TV. Shortly after the birth of their only granddaughter, Heather; Gertrud and Bruno moved to Colorado to be closer to her. She was their greatest joy and they were very proud of her. Gertrud lived at Centre Ave Health and Rehab for 8 years. She enjoyed her visits with friends and family, especially her “grand doggies”, Sophie, Thumper, and Jacques, and therapy dog Misti. Many thanks go to the staff for the love and care they provided to her during her stay there. Thanks also to Pathways Hospice for their care and compassion during her last few months. Gertrud is survived by her son, Bernd Hoffmann (Lynda), and granddaughter, Heather Hoffmann. Memorial contributions may be made to Pathways Hospice or Meals on Wheels Fort Collins in care of Bohlender Funeral Chapel, 121 W. Olive, Fort Collins, CO 80524.

Gertrud Hoffmann, 98, passed away on December 16, 2017 at Centre Avenue Health and Rehab in Fort Collins. Gertrud Kellner was born and raised in Goettingen, Germany and had 5 siblings. She married Bruno Hoffmann in 1942. They had two children,... View Obituary & Service Information

The family of Gertrud Hoffmann created this Life Tributes page to make it easy to share your memories.

Send flowers to the Hoffmann family.