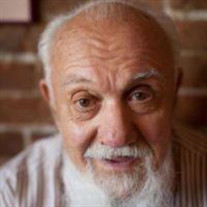 Gerald Eugene Overstreet “OLD TOWN GERRY” was born June 9, 1928 and died April 8, 2020. He died peacefully of natural causes at the age of 91. Gerald “Old Town Gerry” to most, was an icon of Fort Collins, CO. He prompted people to call him “Old Town Gerry” as he strolled the shop-lined streets of Old Town daily and visited the patrons of many establishments for over three decades. There was once an exhibit of pictures of Gerry at the Museum of Art and there was an oil painting of him at Jay’s Bistro where he spent most of his Thursday, Friday and Saturdays listening to music. This painting now hangs at the Armory music venue. He is included in the art mural in Jazz Alley. He was a guest speaker at KRFC and supported local public radio and many non-profits. He loved his community. He imprinted himself on the hearts of people young and old, rich and poor. He was a wonderful man who loved talking to people and hearing their stories. He loved children and was a kind and giving soul. He loved reading, singing and music. He was known and respected by so many. He truly had a passion for people and always saw the potential in everyone. He opened his heart and home to children in need and held a special place in his heart for them. He was a foster parent in Rawlings, WY and fostered over 250 children. Children could make Gerry laugh and his genuine warmth and gregarious personality would make everyone with whom he came in contact better for having known him. Gerry was born in Enid, OK in 1928 and grew up on a melon farm with his parents and 3 sisters. Gerry attended Northwestern Oklahoma State, Colorado A&M (now CSU) and received a graduate degree in Geography from Clark University in Worcester, MA. Teaching at Boston State and Plymouth State was another stop on Gerry’s journey. He served in the Navy from 1950-1954 and eventually entered a 30-year career as a City Planner in cities across the country. Gerry came to Fort Collins in 1992 where he made his permanent home. He worked for over 10 years at Open Door Mission and New Bridges and in his later years he shared meals with the residents of the shelter. Gerry was married to Joan Moira Overstreet in 1979. They had no children as a result of the marriage and eventually separated but remained friends until her death. He had three sisters including Doris Christine Mosher, Evelyn Ireen Wagoner (deceased), and Mary Pauline Snow. “He was a wonderful husband, brother and friend. I will miss the sweet man who friended me back in 1997 when I started working in Old Town. We shared many moments of love and laughter, travel and countless hours of conversation. Fort Collins will not be the same without him and he will be missed by many.”…. Cindy Sarai Gerry will be buried at Fort Logan honoring his years in the Navy. A celebration of Gerry’s life will be held at a later date due to COVID-19 distancing. Gerry asked that donations be made in his memory to The Mission, serving the homeless population of Fort Collins, KRFC public radio, or Adoption Dreams Come True, in care of Bohlender Funeral Chapel, 121 W. Olive, Ft. Collins, CO 80524. Visit bohlenderfuneralchapel.com to send online condolences.

The family of Gerald Eugene Overstreet created this Life Tributes page to make it easy to share your memories.

Send flowers to the Overstreet family.