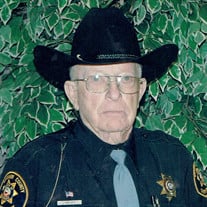 Gerald “Jerry” Douglas Rice, born May 22, 1933 went to be with his Heavenly Father on September 22, 2017 in Fort Collins, Colorado; surrounded by his loved ones. Jerry was born in Scottsbluff, Nebraska to Theodore and Eunice (Kirkland) Rice. Following graduation from Scottsbluff High School he enlisted in the United States Army and served during the Korean War. He began his studies at Colorado State University (CSU) in 1958. He was employed by the Fort Collins Police Department during the 1960’s. Then at CSU, employed first by the College of Veterinary Medicine and then later with the Facilities Services, until his retirement. He served with the Larimer County Sheriff's Mounted Posse for 31 years. His contributions always showed his dedication to the success of the community. Jerry’s family was his joy; he was a devoted father, grandfather, and great-grandfather. In his younger years he could be found at a rodeo, ready to bulldog or rope a steer. He left his passion for rodeo and horses in the hearts of all of his children and it has now been passed to his grandchildren and great-grandchildren. Jerry was a man whose heart was made of pure gold; he always looked out for those around him and was ready to lend a helping hand when it was needed. After retirement, if he wasn't volunteering for his community you could find him expanding his gun collection or bragging about his family to the neighbors. Jerry was a member of Saint Joseph’s Catholic Church and looked forward to getting spiffed up every Sunday. Survivors include Peggy Rice; his children: Doug Rice, Mike (Lisa) Rice, Robin Miller and Kim (Greg) Farrand; grandchildren: Brandon Rice, Mandy (Jonathan) Tanner, Aaron (Ria) Rice, Heather Rice, Molly Farrand, Brooke Miller, Allie Miller, Nick Rice, Lauren Rice, and Matt Farrand; great-granddaughters: Reagan Tanner and Emmaline Rice; sister Patricia Keller; sister-in-law Patsy Miehi; nieces: Jana Keller and Karin Keller; and his beloved bloodhound, Daisy Mae. He is preceded in death by his parents, step-mother Dorothy Rice, sister Sharon Rice, and brother-in-law Ed Keller. The family would like to thank the entire staff at “The Suites” in Fort Collins for the excellent care and support they gave to Jerry and the family during his final days. A Rosary Ceremony will be held at 7:00 p.m. on the evening of Monday, October 2nd at Saint Joseph’s Catholic Church, 300 W. Mountain Avenue, Fort Collins, CO. The Mass of Christian Burial to celebrate Jerry’s life will be held at 2:00 p.m. on Tuesday, October 3rd at Saint Joseph's Catholic Church. A private interment will follow at Grandview Cemetery. If you are unable to attend the church service, contact a family member regarding information for memorial celebration plans.

Gerald &#8220;Jerry&#8221; Douglas Rice, born May 22, 1933 went to be with his Heavenly Father on September 22, 2017 in Fort Collins, Colorado; surrounded by his loved ones. Jerry was born in Scottsbluff, Nebraska to Theodore and Eunice (Kirkland)... View Obituary & Service Information

The family of Gerald "Jerry" Douglas Rice created this Life Tributes page to make it easy to share your memories.

Send flowers to the Rice family.