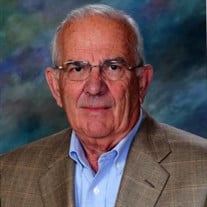 Lt. Col. (Ret) Gerald “Jerry” Elbert Dorwart passed away at his home in Fort Collins, CO on March 31, 2021. On December 24, 1937, Jerry was born to Olive (Elbert) and Jason Dorwart in Friend, Nebraska. Jerry would often remind his family he was the best Christmas gift his parents ever received. Jerry grew up throughout Nebraska, graduating from Saint Patrick’s High School, in Sidney, Nebraska in 1955. He attended both Creighton University and Chapman College, graduating from Chapman College with a degree in Business. Jerry joined the Air Force in 1959. While stationed in Minot, North Dakota, he met the love of his life, Faye Olson. Jerry was a B-52 and B-57 Navigator and flew over 400 missions in Vietnam. He was proud of his service but rarely talked about it. Faye and Jerry married on August 29, 1962. They lived in many places during Jerry’s career, including the Philippines, California, South Dakota, Alabama, and others. Jerry and Faye spent twenty years in Nebraska. Jerry loved Husker football. Jerry and Faye were blessed with three spirited daughters, Joan, Karen, and Catherine. Jerry adored spending time with his family, camping in Colorado, teaching his children about the constellations, and traveling with the love of his life. He enjoyed a great party, he could make the best Manhattan, and he loved a good joke. His humor, gentle soul, and boundless love will be missed. In his later years, he was an active volunteer for McKee Medical Center in Loveland, Colorado, as well as the Veteran’s Administration. He devoted his loving guidance to his six adoring grandchildren, who called him Boppa. His children’s and grandchildren’s lives are forever changed by having a fantastic role model and hero guiding them. Even as Alzheimer’s ravaged his brain and body, he still found ways to bring joy and laughter to his family. He was comforted by hearing Faye’s voice or seeing her at his bedside. Faye was his primary caregiver for the last several years, and Jerry’s face would light up whenever she entered the room, or he heard her voice. Great love never fades. Jerry is survived by his beautiful wife of 58 years, Faye (Olson) Dorwart, daughters Joan Dorwart of Bellevue, Nebraska, Karen (Brad) Burke of Windsor, Colorado, Cathy (Alan) Ertzner of Fort Calhoun, Nebraska. Grandchildren Andy Anderson of Boulder, Colorado, Matt Anderson of Bellevue, Nebraska, Abigail Burke of Fort Collins, Colorado, Ryan Burke of Windsor, Colorado, and Haley Ertzner and Eric Ertzner, both of Fort Calhoun, Nebraska. He is survived by brothers Jason Dorwart of Greeley, Colorado, and Clinton (Carol) Dorwart of Albuquerque, NM. Many nieces and nephews also survive him. Some of his extended family helped to care for him in his final months. Jerry was preceded in death by his parents, sisters Pat Dellenbach, Margaret (Peg) Peetz, nephews Philip and Daniel Peetz, sisters-in-law Patricia Madson, Mary Baich Olson, Mary Dorwart, and brothers-in-law Richard (Dick) Dellenbach, and Kenneth Peetz. In lieu of flowers memorials may be made in Jerry’s name to Rocky Mountain Honor Flight or Pathways Hospice: Rocky Mountain Honor Flight https://rockymountainhonorflight.org/donate-now/ Rocky Mountain Honor Flight C/O Terry Garner – Treasurer 912 W. 139th Ct Westminster, CO 80023-9357 Pathways Hospice https://interland3.donorperfect.net/weblink/weblink.aspx?name=pathhosp&id=98 305 Carpenter Rd Fort Collins, CO 80525 Graveside service will be held Tuesday, April 6, 2021, at 2 PM at Fort Logan National Cemetery 4400 W. Kenyon Ave., Denver, CO 80236. Jerry will be buried with full military honors. Service is open to everyone who loved Jerry and his family. In memory of Jerry, raise a glass and give a toast to those you love and remember him as the amazing man he was to all that knew him. Remember to say “Cheers,” Jerry loved to say cheers with the people he loved. This summer Jerry’s family will be hosting a Hawaiian themed party to celebrate Jerry’s life. Details will follow.

The family of Lt. Col. Gerald "Jerry" Elbert Dorwart created this Life Tributes page to make it easy to share your memories.

Send flowers to the Dorwart family.