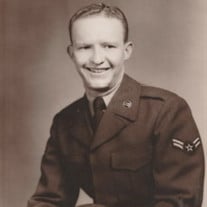 George Ronald (Sandy) Sandage, beloved husband of Marian Sandage, passed away January 24, 2021. Services at St. Josephs Catholic Church, 300 W. Mountain Avenue, Fort Collins, Colorado, Thursday, January 28, 2021 at 9:30 am. All are invited to Bill and Judy Sandage’s house after the service: 347 Marcy Drive, Loveland, Colorado. Burial at Ft Logan National Cemetery February 1, 2021, at 10:15, Staging area C. George, Ronnie, Sandy, Uncle Sandy, Dad, Grandpa Honey, Papa – He went by many names. Always a teacher. He was an instructor at the US West training center for the latter part of his career. He taught those around him by example in a kind and honest way. He shared many tales of his past; with a dash of humor, often laughing too hard to finish the story. He served in the Army Air Corps which became the Air Force. He would share anecdotes for hours about his military service. He never knew a stranger. He was always meeting new people everywhere he went. He raised his children with respect, so that they would show respect. He raised his children with love, so that they would show love. He was married 69 years to Marian (Barnes), a beautiful woman whom he adored. They met at the Weber theater where he was assistant manager and Marian worked at the candy counter. Marian asked Sandy to her High School Pep Club dance and the rest is history. They spent years dancing at the Trocadero (Old Elitches) and El Patio Ballroom (Lakeside). If a song moved Sandy, he would take Marian in his arms and they would dance around the house. He was so proud of his kids: William (Judy), Donna (Gene), Debra (Byron) and lovely Darla who passed in 2017. He enjoyed being active in their young lives and watched with excitement as his family grew with eight grandsons and one granddaughter: Sean (who passed in 1991), William Jr., Ryan, Jason, Thomas (Audra), Steven (Wendy), Devin, Angela, and Damon (Jessica). He was blessed with five great grandchildren: Taylor, Paige, Shaun, Jameson and Addison. If we really want to honor George “Sandy” Sandage, we should strive to follow his example. To love, to learn, to teach, to treat others with respect, to enjoy life, to mind our own business, demonstrate compassion, caring, giving, trust, class and honor. This was who he truly was.

The family of George Ronald Sandage created this Life Tributes page to make it easy to share your memories.

Send flowers to the Sandage family.