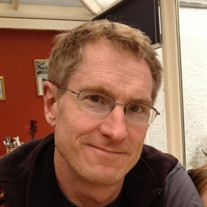 The world has lost a good man. George Parry passed away unexpectedly at his home on August 2, 2021. George was a principal member of the Parry-Korth clan; a loving father, husband, and stalwart friend. His patience, humor, generosity and genius will be sorely missed by all who knew him. George was born on April 8th, 1963 in Aspen, Colorado to Carolyn Parry (Hiatt) and George Parry Sr. He grew up in Aspen where he excelled at skiing, motocross, skateboarding, ice skating, cycling, and unbridaled mischief. Norman Mclean may very well have had a river run through his life, but George Parry most certainly had a bicycle ride through his. George began racing bicycles while attending college in Tucson, Arizona, as well as at Colorado State University. George would make his career in the bicycle industry. George designed bicycles for GT, Schwinn, Cannondale, and Niner bikes. He helped design two of America's Olympic bikes. The bicycle community of Fort Collins would eventually help facilitate the introduction of George to Launie Korth, and the two married in 1996. They have two daughters: Katie (2000) and Sarah (2002). Together, George and Launie set a high standard of parenthood and their obvious love and devotion to their children is unquestioned. He is survived by: His wife, Launie (Korth); Daughters, Katherine and Sarah; Mother, Carolyn Parry (Hiatt); His sister, Amy Collier; His 6 nephews, Daniel, Chris, Cody, Konrad, Kilian, and Kevin, and his 2 nieces, Jessica and Cata. He was preceded in death by his father, George Parry Sr., and sister, Laura Parry. If you’d like to make a donation in George’s honor, please consider the following organizations: https://allianceforsuicideprevention.org/ https://www.imba.com/join# https://bikefortcollins.org/donate/ An informal memorial is scheduled for Saturday, August 7th from 1:00 to 4:00 p.m. at the Parry residence in Fort Collins. Anyone who knew George or his family is welcome to come and celebrate his life with his family.

The world has lost a good man. George Parry passed away unexpectedly at his home on August 2, 2021. George was a principal member of the Parry-Korth clan; a loving father, husband, and stalwart friend. His patience, humor, generosity and genius... View Obituary & Service Information

The family of George Grant Parry, Jr. created this Life Tributes page to make it easy to share your memories.

The world has lost a good man. George Parry passed away unexpectedly...

Send flowers to the Parry family.