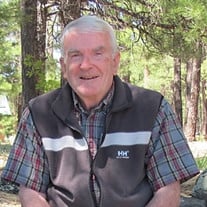 It’s with great sadness that the family of George Barry McEldowney announce Barry’s death on August 4, 2021, in Fort Collins, Colorado. Barry was born in Chicago Heights, Illinois on August 13, 1930, to George Irving and Beatrice Barry McEldowney, direct descendent of one of the Chicago Heights pioneer families. After graduating from Bloom High School, Barry attended Carleton College in Northfield, Minnesota where he ran track for the Carleton Knights. He held the school record for the 800-meter event. He met his future wife, Patricia Carman while both attended college and after serving in the Korean War as an Intelligence agent in the Army, they married on October 23, 1954. They shared an amazing life together raising six children (Scott, Katie, Ellen, Randy, Craig, and Ted). Barry was the 5th generation owner of McEldowney Agency, an insurance and real estate company established in 1893. He had a strong sense of community involvement as a member and past President of the Chicago Heights Lions Club, United Way, and many Chicago Heights business community programs. The family moved to Olympia Fields in 1965 and Barry participated as a past member of the School District #162 Board and Olympia Fields Park District Board. He was also proud of his involvement with the local Boy Scouts troop, and he was himself an Eagle Scout. In 1992, Barry retired and sold the business to his oldest son, Scott. Barry and Pat retired to Flagstaff Arizona where they met many wonderful people and fell in love with four-wheel travel. Barry was able to master some of the most difficult trails, which highlighted their sense for adventure. They traveled extensively around the world to some of the most remote locations like Antarctica, Australia / New Zealand, Galapagos Islands, and Africa. Barry and Pat loved the National Park system and instilled that love of the outdoors in their children. They were most happy rafting the Colorado River, four-wheeling in Canyonlands, or exploring Alaska by vehicle. Barry and Pat moved to Fort Collins in 2016 to be closer to children. Barry leaves behind his best friend and wife of 66 years, Pat, his six children, ten grandchildren, and eight great grandchildren. A special thank you to Pathways Hospice of Fort Collins for providing Barry with compassionate care. Donations in memory of Barry can be made to either the Grand Canyon Trust (grandcanyontrust.org) or Carleton College (Carleton.edu/giving).

The family of George Barry McEldowney created this Life Tributes page to make it easy to share your memories.

It’s with great sadness that the family of George Barry McEldowney...

Send flowers to the McEldowney family.