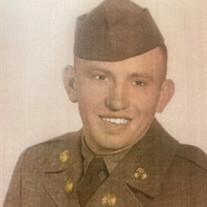 George Jake Knaub peacefully passed away on Sunday, June 19, 2022, at Columbine West Health and Rehab Facility in Fort Collins with his wife at his side. He was 94 years old. George was a prime example of "America's Greatest Generation." George was born on February 1, 1928 in Vale, South Dakota to Jake and Amelia "Mollie" Knaub. He was their first child. Shortly after his birth, his family moved back to the Scottsbluff, Nebraska area, where George and his family farmed until 1974. George loved playing softball and basketball during his high school years and beyond. He loved to reminisce about the Sunday family softball games after church. He graduated from Sunflower High School in 1946. In 1950, George was drafted into the U.S. Army and went to basic training at Fort Riley in Manhattan, Kansas. George was a Korean Veteran and he was very proud of his service to his country. He was honorably discharged from the U.S Army in 1953 as a Corporal. He returned home to the family farm. He then met and married his "sweetheart Violet" on August 9, 1953, and they happily celebrated their two-day German wedding before starting their life working the farm. They had two children to their union, Georgie and Keith, all while farming in the Minatare area. In 1974, George and Violet decided to quit farming and move their family to town in Scottsbluff. George went to work at the Nebraska Panhandle Station as a building and maintenance supervisor. However, even after retirement from this position, George continued to keep busy. He worked at A and L Insulation, driving for Napa delivering parts, and helping family and friends with driving trucks on the farm during harvest. George and Violet would never miss a good "Dutch Hop." They would be found on the dance floor having the time of their lives. He also loved to watch any game on television that included a ball or puck. He attended many softball games that Georgie and Keith played in. In 2011, George and Violet moved to Windsor, Colorado to be near their daughter and son-in-law. Even though they left behind many friends and family in the Scottsbluff area, they made many new friends with their neighbors. While in Windsor George decided that he needed to continue to work. He went to work at Walmart at 81 years of age. When he was off work, he could be found drowning worms, trying to catch "the big one that got away." For fun, he would do his own lawn mowing and then head to his daughter's home to mow her lawn too. Those lawns will never look any better, no matter who mows them. The landscaping was always pristine. Thanks Dad! In 2012, George had the opportunity to go on the Colorado Honor Flight to Washington DC. He went on the Honor Flight with his daughter and his friend Bill Loose from Scottsbluff. They had the "time of their life" visiting our nation's capital and the many U.S. Memorials. George never tired of talking about how special that trip was. He always had his Korean War Veteran hat on wherever he went. The fall of 2017, George and Violet moved in with their daughter and son-law. They helped to make a new house a home. It was so fun to have them under the same roof. However, in 2020 as George was unable to walk anymore, George and Violet moved to Columbine West Health and Rehab in Fort Collins. We would like to thank the staff at Columbine for their wonderful and loving care. The family would also like to thank Halcion Hospice for their care during George's last days. George is survived by his wife, Violet, his daughter, Georgie, and son-in-law, Ray. and Violet Moury, sister. George was preceded in death by his father, Jake and mother, Mollie, his son, Keith and sister, Bernice. Viewing will be held 9 am - 4 pm, Thursday, June 23, 2022 at Bohlender Funeral Chapel. A funeral service will be held 10 am, Saturday, June 25, 2022 at Zion Evangelical Church, 3617 5th Ave., Scottsbluff, NE. Interment with military honors will follow at Fairview Cemetery.

George Jake Knaub peacefully passed away on Sunday, June 19, 2022, at Columbine West Health and Rehab Facility in Fort Collins with his wife at his side. He was 94 years old. George was a prime example of "America's Greatest Generation." George... View Obituary & Service Information

The family of George J. Knaub created this Life Tributes page to make it easy to share your memories.