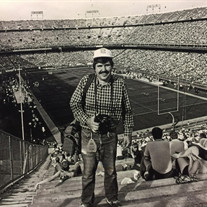 Our brother Fred Yates passed away on May 14, 2021 in Fort Collins, Colorado from chronic medical conditions. He was born in Laramie, Wyoming on June 26, 1957 to Frances Bell Yates and John Yates. He grew up in Laramie and graduated from the University of Wyoming in 1983 with a degree in photojournalism and public relations. His love of photography was developed at an early age using a Brownie camera and taking more than a few rolls of film of the engine of our mom’s Impala station wagon. His love of people and their stories came from his childhood in Laramie, in the days when children could roam the town, visiting with the store owners and residents. In college, Fred was photo editor of the University of Wyoming’s student newspaper, The Branding Iron. His first job following graduation in 1983 was as a photojournalist with the Wyoming Tribune Eagle. During his 11 years there, he interviewed and photographed politicians and residents of Wyoming, many of whom became lifelong friends. He captured the history of Wyoming with his pictures of the old locomotive steam engines running through Cheyenne, of the faces of the rodeo clowns at Cheyenne Frontier Days, of the signs and buildings in Cheyenne, and of the 1988 Yellowstone forest fires when the Old Faithful Inn nearly burned down. He later worked at the Laramie County Community College as an editor and photojournalist, where he met his lifelong friend, Jan Mansfield. He subsequently moved to Louisville, Kentucky, and Boston, Massachusetts before returning closer to his roots in Fort Collins, Colorado. In Fort Collins, Fred worked for the USPS as a mail carrier. He was able to snap a few pictures of his route in the snow, of the mailbox with the Christmas thank you gift to the mail carrier, and of a mail truck filled with letters and packages. Fred was preceded in death by his mother, his sister Pam, his best friend and brother Steve; his walking companions, two Bichon Frise dogs named Toby and Joey, whom he referred to as ‘his kids’. He is survived by his sisters Andrea Kasper of Des Moines, Iowa; DeEtte Yates of Fort Collins; Nadine Westley of Colville, Washington; brother Charles Yates (Anita) of Cody, Wyoming; and numerous nieces and nephews and their children. Arrangements are under the direction of Bohlender Funeral Chapel, Ft. Collins. Condolences may be sent to bohlenderfuneralchapel.com. Donations in Fred’s name can be made to NPR, his favorite radio station where he often volunteered to answer phones during its pledge drives, or a charity of choice. We will celebrate Fred’s life this summer with a family remembrance in Cody, Wyoming. We will scatter Fred’s ashes at nearby Heart Mountain, where he will join his mother, sister and brother. Our family gives a heartfelt thanks to the staff of the Medical Center of the Rockies, whose concern was always for Fred’s comfort during his final days.

Our brother Fred Yates passed away on May 14, 2021 in Fort Collins, Colorado from chronic medical conditions. He was born in Laramie, Wyoming on June 26, 1957 to Frances Bell Yates and John Yates. He grew up in Laramie and graduated from the... View Obituary & Service Information

The family of Frederick John Yates created this Life Tributes page to make it easy to share your memories.

Send flowers to the Yates family.