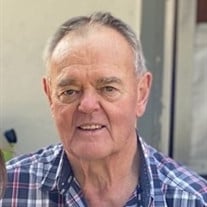 Francis Eugene “Gene” Sakala Gene, age 85, passed away on December 16, 2020, in Scottsbluff, Nebraska. After a courageous fight, he succumbed to difficulties caused from the coronavirus. He was born on December 11, 1935, in Denver, Colorado, the son of Peter Paul Sakala, Sr. and Frances Elizabeth (Drotar) Sakala. Survived by his partner Roberta Vicharra; four children, Lawrence, Scott (Marilyn), Criss (Cindy), and Louann (John Joram); ten grandchildren; five great-grandchildren (with another on the way); brothers Pete “Sonny” and Richard; and several nieces and nephews. He was preceded in death by his parents, daughter Virginia Lynn, and brothers Bob and Mike. The family would like to thank the medical staff of Regional West Medical Center for their valiant efforts and care of our father as well as others during this pandemic. Gene spent his childhood and early adult years in Denver, Colorado; a graduate of Regis Jesuit High School. He married Virginia Thompson in 1957. He moved his family to Wellington, Colorado in 1969; moved to Gering, Nebraska in 1983 where he lived out the rest of his life. Gene was an avid salesman, worked several years for Sears Roebuck & Company and Harsh Hydraulics, Inc., before becoming a small business owner of a truck equipment company. In earlier years, he loved to fish and hunt, spending a lot of time with his brothers, friends, uncles, and cousins during elk season. He enjoyed the family reunions, where he could see and catch-up with relatives and friends. He also enjoyed his trips to Peru with Roberta, visiting her family and relishing the scenery and food. He was a proud grandfather, delighted in hearing about all his grandchildren’s activities and accomplishments. His wit and humor will be missed. A Memorial Mass will be held at Christ the King Church, 18th and M Street, Gering, Nebraska 69341 on Saturday, June 26, 2021 at 2:00 p.m. He will be laid to rest in a private ceremony at Roselawn Cemetery, Fort Collins, Colorado. In lieu of flowers, please consider a donation to Christ the King Church (christthekinggering.com/online_giving) or to the Virginia Lynn Sakala Memorial Scholarship Fund. The scholarship fund was established at the University of Colorado (Boulder) - School of Education, upon the passing of Gene’s daughter. Scholarship donations may be sent to 2341 Albion Street, Denver. CO 80207.

Francis Eugene &#8220;Gene&#8221; Sakala Gene, age 85, passed away on December 16, 2020, in Scottsbluff, Nebraska. After a courageous fight, he succumbed to difficulties caused from the coronavirus. He was born on December 11, 1935, in... View Obituary & Service Information

The family of Francis Eugene Sakala created this Life Tributes page to make it easy to share your memories.

Send flowers to the Sakala family.