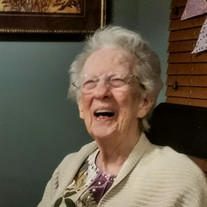 Frances Barber McCommons died peacefully in her sleep on June 4, 2021 in Fort Collins, Colorado at the age of 101. Frances was born during the Spanish Flu Pandemic and died during the COVID-19 Pandemic. Frances lived a life focused on God,... View Obituary & Service Information

The family of Frances Lee McCommons created this Life Tributes page to make it easy to share your memories.

Frances Barber McCommons died peacefully in her sleep on June...

Send flowers to the McCommons family.