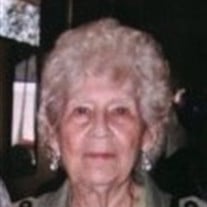 The long, productive, and creative life of Elsie H. Stephens came to a peaceful end on Friday, February 11, 2022, at her home in Fort Collins. She was 96. It is with heavy hearts we announce her passing. Mrs. Stephens was born to Alfred David and Lillian E. Stiker Hanes in Mount Vernon, Indiana on August 20, 1925. She was the third oldest of ten children. Her childhood was spent in and around Southern Indiana and Illinois. In 1933, her father A.D. Hanes, purchased the Dahlgren Echo newspaper and print shop. The family relocated to the Southern Illinois community where Mr. Hanes and the older children worked on the production of the newspaper. Elsie worked alongside her sisters and brothers to publish the weekly news and run the print shop. Elsie spent many happy summers at the home of her paternal grandparents. They operated a tourist home in Mount Vernon, Indiana for the Keck and Gonnerman Farm Equipment company. Farmers from near and far would come and stay to shop for and purchase operating equipment. Elsie often told engaging stories describing the dicey situations, colorful people, and events she witnessed during and after prohibition while helping her grandparents at the tourist home. After high school and during WWII, Elsie worked at the Farm Bureau Refinery in Mount Vernon as a yield clerk. She calculated and kept records of the amount of oil in the barge tankers arriving at the port on the Ohio river. At that same time, she and her sister, Jeanette, were members of the local civil air patrol. She made her first solo flight in Evansville, Indiana in 1944. At the close of WWII, on September 18, 1945, she married Morton H. "Steve" Stephens in Hattiesburg, Mississippi. Steve was a landman, abstractor, title officer, and obtained mineral leases for oil companies. Elsie assisted him in the endeavor. They lived, worked, and traveled the lower forty-eight working for oil companies and local abstract companies. Mant times they had a crew of typists with them. Elsie and Steve fell in love with Fort Collins when passing through and finally settled here in 1953. Elsie attended CSU business school and eventually received her associate degree. Over the years she was the office manager for Production Credit Association. (They made farm and ranch loans for the federal government). She also ran the office for Dr. Robert Weakley (Orthodontist) and Thomas J. Bassett of the Metropolitan Life Insurance Company of Fort Collins. In 1982, she was the president of the local chapter of the National Secretaries Association. Elsie was a member of the First United Methodist Church and worked as a volunteer in the church office. Throughout her life, the days Elsie enjoyed the most were spent drawing and painting. She loved her time out with the Poudre Valley Art League sketch group. In 1988 she entered a pastel drawing titled, "The Blue Faced Man" and won first prize in the Poudre Valley Art League spring show. She was a very stylish lady and enjoyed art. She appreciated beauty everywhere she went. Elsie loved gardening. Her specialty was growing flowers, particularly roses. She hunted and collected four leaf clovers. It seemed butterflies were attracted to her. Elsie was preceded by her loving husband of fifty-three years, Morton H. "Steve" Stephens; her parents A.D. and Lillian E. Stiker Hanes; sisters Annabelle Cook, Jeanette Miller, WandaLee Straw; and brothers Alfred David Hanes, Jr., and Frank Hanes. She is survived by her daughter, Rebecca J. Nelson (David); sisters Mary Wessel (Norman), and Fran Braun, both of Weslaco, TX; and brothers Charles A. Hanes of Cape Coral, FL, and V.L. Hanes (Vicky) of Dahlgren, IL. No services are planned at this time, but the family hopes to come together in the spring or summer of 2022 to celebrate Elsie's life. The family would like to thank nurse Holly Edmunds for her wonderful companionship, support, and care during Elsie's final year. She enjoyed her time with you, Holly, and your egg sandwiches. Thanks to Columbine Bloom at Home staff. Also, Pathways Hospice staff for your guidance and support day and night. A special thank you to nurse Angela at Pathways for lifting us up during this difficult time. We appreciate and love you caregivers. Ms. Elsie will be missed but we know her spirit will live on in Christ. Warm Regards, the Stephens/Nelson Family.

The long, productive, and creative life of Elsie H. Stephens came to a peaceful end on Friday, February 11, 2022, at her home in Fort Collins. She was 96. It is with heavy hearts we announce her passing. Mrs. Stephens was born to Alfred... View Obituary & Service Information

The family of Elsie H. Stephens created this Life Tributes page to make it easy to share your memories.

The long, productive, and creative life of Elsie H. Stephens...

Send flowers to the Stephens family.