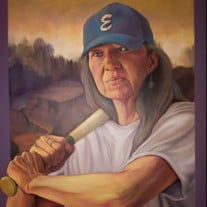 Eloise Kinney—mother, daughter, sister, wife, friend, lover of haiku, snickerdoodles and well-told tales—died on July 9 in Fort Collins, Co. She was 63. The sixth of 7 children of Dr. Phyllis Poe Kinney and I.W. “Bud” Kinney, Eloise was born in Laramie, Wyoming, on April 16, 1957. She loved the family she came from and she lived for the one she made with Bill Schmich, whom she met in 1979 in Eugene, Ore., while he was working as a cook at Mama’s Homefried Truckstop. She called him Darlin’ Bill and after their marriage in 1989, they raised two beloved sons, Ivan and Jasper Schmich Kinney. Bill died in 2013 and she missed him every day afterward. Other things Eloise loved: Gardens, elephants, thrift shopping, pancakes, baseball (especially the Chicago Cubs), the Argentinian musician Astor Piazzolla, her little dogs Tugg and Ollie, and before them her little dog Boutros Boutros-Ghali, named after a secretary-general of the U.N.. She didn’t give a hoot about cooking but she loved Bill’s, especially his homemade bread. She also loved singing harmony. She fondly remembered how as a member of the University of Wyoming choir, she went to Russia and to Mexico, and how in Mexico an earthquake emptied the auditorium but the choir sang on. She loved her mother, who is 97, and they were good friends throughout her life. And Eloise loved stories. “No, no, no,” she was known to admonish those telling a story poorly, “Don’t just tell the facts. You need to embellish!” She once walked into a spider web and screamed; she insisted the spider screamed too. She had a strong belief in things unseen. Eloise and Bill lived for a while in Chicago, where she worked at the American Library Association. She later did freelance copy editing and served as a judge for the Chicago Tribune’s Nelson Algren Short Story awards. She had a sense of mischief and a ready laugh. She also had a tender soul; music could make her weep. An incisive writer with a sly wit, she wrote sharp book reviews. Much of her writing, however, exists in the emails she shared with a wide group of correspondents. She occasionally emailed editors at the New York Times to correct errors. An avid reader with two master’s degrees, she wrote to famous authors, including the Canadian novelist Robertson Davies, who replied to her missives with a handwritten note. She wrote radio host Garrison Keillor, asking that he hire her mother as the “national weatherwoman” who, based on maternal experience and training as a psychologist, would forecast ominous clouds every day for the entire country. Keillor read her letter on his show, giving credit to Eloise. In addition to her mother and her two sons, Eloise is survived by her siblings Majel Gardzelewski, Lisa Kinney, Bob Kinney, Todd Kinney and Laramie “Flippy” Kinney as well as by many adoring in-laws, cousins, nieces and nephews. She was preceded in death by her father, by her beloved brother Wayne Kinney III, and by Ruth Poe, known as “Gammi”, the maternal grandmother who helped raise her. Her niece Jeanette Gardzelewski, who was trained by Eloise at an early age to call her “my favorite aunt Eloise,” speaks for many when she says: “I will miss her dearly and am happy to have so many of her thoughts on movies and music and books and life filling my heart and dancing around in my head forever.” If you have thoughts, stories or photos to share about Eloise, please visit the Facebook page below. A Zoom service will be held in August, and information about it will also be on this Facebook Page: https://www.facebook.com/groups/eloiselkinney. Please send cards or letters to Laramie Kinney at PO Box 1382, Laporte, CO 80535. You may also visit bohlenderfuneralchapel.com to send the family online condolences. In lieu of flowers, donations may be made to the Food Bank for Larimer County in care of Bohlender Funeral Chapel, 121 W. Olive St., Fort Collins CO 80524.

The family of Eloise Lucile Kinney created this Life Tributes page to make it easy to share your memories.

Send flowers to the Kinney family.