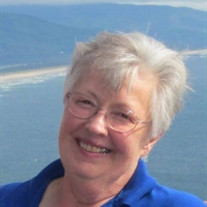 Dorothy Jeanne Erdman passed away on October 22, 2021 at her residence in Fort Collins, Colorado. Dorothy is preceded in death by her beloved husband Kimball Stewart Erdman and two grandchildren. She is survived by her five children: Heidi Erdman, Annelisa Lee, Kimball Erdman, Paul Erdman, and Julia Wagner, and their families including spouses, 28 grandchildren and 12 great-grandchildren. She is also survived by her sister-in-law Jane Mason and sister-in-law Ruth Anderton. Dorothy leaves a legacy of faith, love, family, and music that has touched the hearts of many people in many places. Dorothy was a faithful member of the Church of Jesus Christ of Latter-day Saints. Dorothy was born in Bozeman, Montana on Feb 6, 1941. She attended elementary school in Montana and high school in Idaho. She graduated from Brigham Young University in 1962 and then served as an elementary school teacher from 1962 to 1967 in Idaho, Oregon, and Utah. Her love of music became part of her legacy as a school teacher, as she taught music in addition to other subjects. Dorothy married Kimball Stewart Erdman on Jan 18, 1967, in the Salt Lake City Temple of the Church of Jesus Christ of Latter-day Saints. Dorothy and Kim moved later that year to northwestern Pennsylvania, where Kim taught at Slippery Rock University. During their time in Pennsylvania Dorothy and Kim were blessed with a beautiful family. The family still loves to share time together looking at old photos of “life on the farm” in Pennsylvania and talking about the adventures of growing up together. A love of music, an appreciation for hard work, a deep love for family, and faith in Jesus Christ was imbedded into the hearts of all of the family through this time. Kim and Dorothy made a clear choice to raise their family with faith in Jesus Christ at the center of the home. In addition to her service to her family, Dorothy also gave service in the 4H organization, her church, and also taught piano. Due to health challenges that Dorothy faced, the family relocated to Newberg Oregon in 1987. Dorothy loved sharing time with Kim (and any other family members) at the coast and in the mountains in Oregon. Dorothy continued to teach piano. In all, she taught piano for 40 years. After Kim’s retirement, the couple served as missionaries for the Church of Jesus Christ of Latter-day Saints in Manilla, Philippines (2004 – 2006), where Dorothy taught music, playing keyboard, and hymns, while Kim taught scripture classes. The couple also served two missions (2006 – 2008, 2008 – 2010) in the Tampa Florida area, where Dorothy again taught piano and served people around her. After Kim passed away in 2012, Dorothy moved from Oregon to Colorado and lived with her daughter Annelisa and her family, first in Loveland, and then in Fort Collins. Dorothy continued to give love and service to all around her for the rest of her life. Dorothy’s legacy of faith, love, and music continues strong in the lives of her family and those who were touched by her life. The family requests that in lieu of flowers, donations be made to the humanitarian aid fund of the Church of Jesus Christ of Latter-day Saints. Viewing will be held 10 am with the funeral service to follow at 11am on Saturday, October 30, 2021 at the Church of Jesus Christ of Latter-day Saints on 1320 Harmony Rd. Interment will take place at Gibbs Cemetery in Sherwood, Oregon.

Dorothy Jeanne Erdman passed away on October 22, 2021 at her residence in Fort Collins, Colorado. Dorothy is preceded in death by her beloved husband Kimball Stewart Erdman and two grandchildren. She is survived by her five children: Heidi... View Obituary & Service Information

The family of Dorothy Jeanne Erdman created this Life Tributes page to make it easy to share your memories.

Send flowers to the Erdman family.