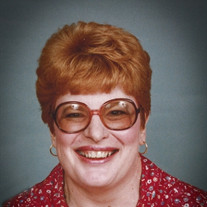 Donna Lee Knappenberger was born in Durango, Colorado on June 29, 1940 to Carl and Olga (Koehler) Schubert. She passed away after a short illness on November 11, 2019 at 79 years of age. She was a woman of strong faith, whose trust in the grace of God was a comfort throughout her life. Donna grew up the middle of three daughters in Grand Junction, Colorado. She had plans to attend the University of Wisconsin followed by law school, but met and married her husband Richard Knappenberger in 1959. Two daughters soon followed and Donna devoted herself to raising her girls in Denver from 1964 until 1998 when she and Richard moved to Fort Collins to be closer to their daughters. She was very curious and passionate about a variety of subjects so her days were filled with the study of religion, transcribing books into Braille for the blind, teaching English to refugees, reading for pleasure, and watching sports. She was an early fan of the Broncos, which of course demanded a lot of loyalty in those early years. She was also a devoted supporter of the Colorado Rockies from the beginning. Her favorite sports to watch besides the home teams were tennis and college football. Donna was preceded in death by her parents and her husband. She is survived by her two daughters, Diane Knappenberger of Wellington, Colorado, and Debbie (Richard) Sunken of Red Feather Lakes, Colorado, two sisters, Jean Apezteguia of Paso Robles, CA and Ann Beyrer of Mesa, Colorado, as well as 5 nieces and 2 nephews. She will be missed by all her family and friends. A memorial service for Donna will be held on Saturday, November 23rd at 1:00 pm at Shepherd of the Hills Lutheran Church, 1200 S Taft Hill Rd, Fort Collins. In lieu of flowers, donations may be made in Donna’s name to Shepherd of the Hills, or to the Community Literacy Center at Colorado State University: literacy.colostate.edu.

Donna Lee Knappenberger was born in Durango, Colorado on June 29, 1940 to Carl and Olga (Koehler) Schubert. She passed away after a short illness on November 11, 2019 at 79 years of age. She was a woman of strong faith, whose trust in the grace... View Obituary & Service Information

The family of Donna Lee Knappenberger created this Life Tributes page to make it easy to share your memories.

Donna Lee Knappenberger was born in Durango, Colorado on June...

Send flowers to the Knappenberger family.