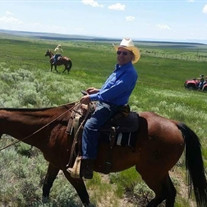 Donald Fayette Blandin of Walden, CO rode into the sunset on December 30, 2019 at the age of 82. Don was born to parents Earl and Minnie Blandin on April 20, 1937 in Greeley, CO. He grew up 4th of 6 brothers and 1 sister, helping his parents’ farm in the Greeley area. Don graduated from high school and enlisted in the Navy working as an electrician on aircraft carriers and airplanes. When Don returned from the Navy, he worked in farming around the Greeley area for a short time. He was asked to work on the Arapahoe Ranch near Coalmont, CO. He met Judith Ann Geer at a dance and they married on June 1, 1963. They worked on Judy’s grandparents ranch Northeast of Walden for 46 years. Don and Judy had two boys Samuel and Raymond. Don loved ranching. So much so that he felt he didn’t need much of a vacation. He felt ranching and living in North Park. Don wore a leather belt with the name Jolly Rancher on it. A nickname a few had for him. Don loved to snowmobile, ride ATV’s, and bowl. There wasn’t anything he couldn’t fix. He was always tinkering with or building something. Everyone he met was a friend and he would help anyone, often helping stuck hunters, giving hunting advice and sharing stories. He enjoyed making leathercraft projects. Making chap’s, purses, belts, wallets in his relaxing time and teaching his skills to 4-H kids. Don was involved with Odd Fellows, Stockgrowers and other organizations. Don is survived by his son Sam (Shelley), 5 grandchildren, and 4 great grandchildren. He is preceded in death by his parents, 4 brothers, and his son Raymond. The family is grateful for condolences, visit bohlenderfuneralchapel.com, and donations can be made to the Alzheimer disease association in care of Bohlender Funeral Chapel, 121 W. Olive St., Ft. Collins CO 80524.

The family of Donald Fayette Blandin created this Life Tributes page to make it easy to share your memories.

Donald Fayette Blandin of Walden, CO rode into the sunset on...

Send flowers to the Blandin family.