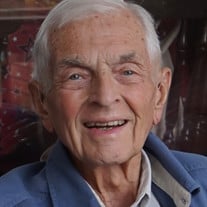 Dr. Dennis (Denny) Lynch was born on July 26, 2937 in Coffeyville, Kansas to Ben and Margurite Lynch. He grew up in Kansas and Oregon and then went to Colorado for college. In 1958 he graduated from Colorado State University with a BS in Forestry and was commissioned in the US Army. In 1959 he married Joyce Sheeley of Salida, CO. After the Army he became a forester on the Mt Hood NF. In 1962, Denny moved to the Roosevelt NF and, while working, completed a MS in Business at CSU. He was then transferred as District Ranger to the Pikes Peak District. Following this he was assigned to the Colorado State Forest and completed a PhD. in 1974 he became a Professor of Forest Sciences at CSU and loved teaching, advising, and mentoring students. During this time he and Joyce founded the Christian Foresters Fellowship on the CSU campus which met weekly for 24 years and has affiliated groups across the nation and world. Denny's times with students in the Fall semester forestry classes at Pingree Park and with the CFF meetings on campus and in his home are some of his fondest memories. He retired in 1998. He was elected SAF Fellow and Golden Member and received the SAF Carl Schenck Award for Excellence in Teaching Forestry. He also received the Erick Nelson Award from Christian Leadership Ministries and other awards for teaching and service to students. He was a life member of the NRA, the American Legion, and the Council on Forest Engineering. Later Denny became a Gideon who loved to share the gospel. Survivors include his best friend and wife, Joyce; children, Greg and his wife, Beth, and Kristy and her husband, Phil; grandchildren, David, Melissa, Jonathan, Nathan, Stacy, Matthew and Celeste, Shane and his wife, Kayston, Shannon; great-grandchildren, Daniella, Moriah & Benjamin, Payton, Clayton; a brother, Pat and his wife, Patty, and a sister, Lynda and her husband, Paul. On November 17, 2019, he peacefully passed into the arms of Jesus. In lieu of flowers, please donate to a charity of your choice. A Memorial Service will be at 1:30 p.m., Saturday, December 7, 2019 at Clearwater Church, 2700 S. Lemay Ave, Fort Collins, CO 80525

Dr. Dennis (Denny) Lynch was born on July 26, 2937 in Coffeyville, Kansas to Ben and Margurite Lynch. He grew up in Kansas and Oregon and then went to Colorado for college. In 1958 he graduated from Colorado State University with a BS in Forestry... View Obituary & Service Information

The family of Dennis L. Lynch created this Life Tributes page to make it easy to share your memories.

Send flowers to the Lynch family.