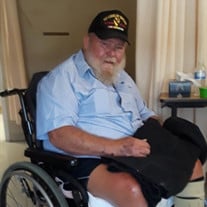 Dennis Eugene Edwards Obituary It is with saddened hearts we announce the passing of Dennis Edwards on Saturday, September 19, 2020 at the age of 71. Dennis was born on July 20, 1949 in Jackson, Tennessee. He attended Treadwell High School in Memphis, TN, Arizona State University in Tempe, AZ, and Front Range Community College in Fort Collins, studying Microsoft technology. Dennis is a Vietnam veteran who served as a cook stateside and a door gunner on Huey helicopters in Vietnam. Dennis was awarded two Purple Hearts for injuries incurred fighting the war in Southeast Asia. Dennis worked as a roadie for a rock band and hack (cab) driver in New York City, cable installer in Phoenix, AZ, and an over-the-road truck driver and owner operator of trucks with his business partner and brother-in-law, Guy Petroziello. Dennis had a sense of adventure and traveled throughout the U.S. living with his wife in New York, California, Arizona, finally settling in Fort Collins in 1984. He enjoyed music, movies, big mugs of coffee, his cigarettes, his animals, The Big Bang Theory, and he cheered whole-heartedly for the Denver Broncos. A man of few words, Dennis is known for his quick-wit, infectious smile, sense-of-humor, and strong will as well as his sweet potato pie and delicious fruit salad that he made from scratch during the holidays. Dennis is survived by his wife of 48 yrs. Kathleen Edwards, daughter, Kayleen Allen, sisters, Julia Yobst, Dixie Arnall and Joyce Bodkin, son-in-law, Chad Allen, granddaughter, Bailey Allen, and extended family, Karl and Lucille Sokol, Jon, Kim, Tanner and Noah Sokol, Leo and Alice Sabatino, Leonardo and Christina Sabatino as well as cousins and relatives in Dupont, PA, and areas in the South. A funeral service to commemorate Dennis’ life will be held Saturday, September 26, 2020 at 10:00 a.m. at Bohlender Funeral Chapel, 121 W. Olive St, Ft. Collins, Colorado. Dennis’ wish was to be cremated and his ashes set free from the highest point at Rocky Mountain National Park. An additional memorial service will be held with his New York family in the near future. The Edwards family would like to thank the staff and the friends he made at the Fort Collins Healthcare Center where he resided for the last 5 years of his life.

Dennis Eugene Edwards Obituary It is with saddened hearts we announce the passing of Dennis Edwards on Saturday, September 19, 2020 at the age of 71. Dennis was born on July 20, 1949 in Jackson, Tennessee. He attended Treadwell High School... View Obituary & Service Information

The family of Dennis Eugene Edwards created this Life Tributes page to make it easy to share your memories.

It is with saddened hearts we...

Send flowers to the Edwards family.