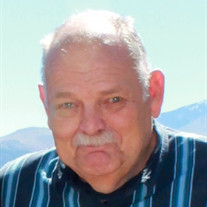 Dennis Ray Burnett, 71, died peacefully at his home in Westminster, Colorado on January 22, 2020. Dennis was born March 18, 1948 in Oakland, California to Roy Dallas and Thelma Mae Burnett. He graduated from Poudre High School in Fort Collins, Colorado in 1966 and attended Colorado State University, majoring in Geology. He was on the PHS Varsity football squad that played in the Colorado State playoffs both his junior and senior years. He was also on the freshman football team at CSU. Dennis and his wife Sandra Kay (Moore) were married for 53 wonderful years. They were blessed with three children, Robert Roy (who preceded him in death), Michelle Kalleen and Heather Aileen. Dennis was affectionately known as Papas to six grandchildren, Katelyn Denise, Mitchell Dallas, Audra Rose, Johnnie Wade, Andrew James and Jonathan Robert. Dennis had a passion for geology and mining for precious metals. He was onsite when the Summitville Gold Boulder was discovered, which is now in the Denver Museum of Nature & Science. Dennis also built houses and agricultural buildings in Sonoma County, California. After losing most of his eyesight at 45, he was the crew-chief for 15 Habitat for Humanity houses in Bloomington, Illinois. One of his greatest joys was working alongside his son Rob, building these homes. Dennis also enjoyed fishing and camping from the Pacific Ocean to the Atlantic. He and Sandy were also fortunate to travel to over 20 countries in Europe. Dennis was a wonderful cook and baker, creating his own recipes. His most loved specialties are his Chili Colorado and his Pot Roast. He also faithfully baked his beloved wife, Sandy, her favorite orange chiffon cake for her birthday. Dennis was the kind of man who would give the shirt off his back to help others. Whether it was a stranger on the side of the road, a neighbor needing a helping hand, or assisting his children with their numerous building projects; if someone needed help, he was there in a heartbeat. In lieu of flowers, donations may be sent to Habitat to Humanity in his memory. A Memorial Service will be held at Broomfield United Methodist Church , 545 West 10th Avenue in Broomfield, CO 80020 at 11:00 a.m. on Friday, January 31, 2020.

The family of Dennis Ray Burnett created this Life Tributes page to make it easy to share your memories.

Dennis Ray Burnett, 71, died peacefully at his home in Westminster,...

Send flowers to the Burnett family.