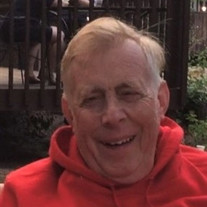 David Arthur Delano, age 76, passed away in the early hours Friday morning, October 29, 2021 at Poudre Valley Hospital, Fort Collins, Colorado due to complications caused by Lewy Body Dementia. David was born in Sturgis Michigan in April 1945 to the late Marvin Arthur DeLano and Mary Francis Ellett. He and his parents lived above the Tasty Nut Shop in White Pigeon, Michigan where they served sodas, ice cream, homemade candy, and nuts. David went to school in Battlecreek, Michigan where they offered classes for blind children. When David was seven, the family moved to Long Beach California because they provided good schooling for the visually impaired. All of David’s grandparents adored spending time with him and did so often.As a child David loved to play with trains. When he was teen, he became a ham radio operator. He also repaired televisions and radios for others. David graduated with an Associates of Science from Long Beach City College in Electronics. He also attended some courses at Long Beach State and was part of a blind bowling club. The club needed more participants, and the school counselor gave him a girl’s number. Little did he know, it was Janie, his future wife. David invited her to Campus Crusade for Christ, where they formed a connection. He also got Janie to join the bowling club. He married Janie in July 1967. David attended Controlled Data Institute where he was trained in computer hardware and software. This training kicked off the start of his computer science career. David got a job as a diagnostic programmer in Los Angles, and later went to work for Hewett Packard in Cupertino, California in 1972. In 1978 David was offered a transfer at Hewett Packard to Fort Collins, Colorado. He worked at this HP location until he retired. Once David had started his computer science career, he was ready to start a family. David and Janie welcomed their daughter Brenda in 1968, their son Brian in 1971, and their daughter Valerie in 1974. He was a loving father who always provided for his family, ensured that they got to go on many fun vacations, and diligently took his children to church. His children gave him eight grandchildren. Brenda is the mother of Monica, Corianne, and Jalaina. Brian is the father of Brendan, and Bryant. Valerie is the mother of Renee, Chelsea, and Amber. He also has three great grandchildren. Monica is the mother of Izabella. Corianne is the mother of Waylon and Lucille. David had a large part in raising all his grandchildren and great grandchildren as they were watched by David and Janie while their parents worked. David was a good husband, father, pappy, and is loved by all. In lieu of flowers, please send donations to Convoy of Hope https://convoyofhope.org or Doctors With Out Boarders https://doctorswithoutborders.org.

The family of David Arthur DeLano created this Life Tributes page to make it easy to share your memories.

Send flowers to the DeLano family.