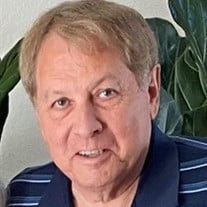 Our very dear husband, father and grandfather, Dan Mathewson, passed away on May 13, 2022 after a year long battle with several health issues. Dan fought hard this past year to try to stay with his family and tried every intervention possible to extend his life. He passed peacefully surrounded by the love of his family. Dan was born in Fort Collins, Colorado on November 11,1952 to Don and Avis (Maddy) Mathewson. Yes, he was a “townie”, attending Dunn Elementary, Lincoln Junior High, Poudre High School and Colorado State University in Fort Collins, Colorado. After college, Dan returned to his former high school, Poudre, to begin what would be a long and rewarding career as an educator and coach. Early in his career, Dan coached teams for the City of Fort Collins Parks and Recreation Department. He also coached for the Denver Nuggets camps during the summer. He coached football, basketball and baseball at Poudre High School. Dan was devoted to his students and his student athletes. Many of his former students have stayed in touch with Dan over the years introducing him to their children and even some of their grandchildren. They would share stories with him about what a positive influence he was in their lives which helped Dan to know that his work with his students produced such a positive outcome. He founded Sports Unlimited, a girls basketball club, that was devoted to providing a safe learning sports environment for girls who loved the sport of basketball and wanted to improve their skills. He made sure that everyone who wanted to be a part of the organization was able to join and to participate in the many trips he organized to play in tournaments across the country, even paying for expenses for girls who weren’t able to do so. Dan and Lari were co-owners of the The Ram’s Horn, a Colorado State University fanwear shop at Foothills Mall for 13 years. In his later years, Dan became president of the Poudre Football Alumni Association working with his dear friends and coaching colleagues to provide a fundraising organization to help support Poudre Football. He was the driving force behind the first Hall of Fame Banquet and helped to establish the Wall of Fame at Poudre recognizing former members of the administration, staff, coaches and players. He organized the celebration to recognize the 50th anniversary of the Poudre Football State Championship team. It was important to Dan to established a history of the people who have given so much to the football program since the establishment of Poudre High School. He wanted this history preserved for future generations. Dan’s family was the most important aspect of his life. He was a loving, wise, kind and devoted husband, father and grandfather. Dan married Lari Marie McCarter on November 12, 1983 and became a father to three daughters, Michale Chambers, Cody (Chambers) Augusta and Casey (Chambers) Turner. He immediately invested himself in becoming the best “bonus” dad he could possibly be to his children. He loved them as his own and kept them safe. They were his world and he was so very proud of the kind and accomplished women they had become. He loved his son-in-laws, Corren Turner and Rafael Augusta so very much. He was in awe of their kindness, intelligence and dedication to their families. It was such a relief to him to know that his daughters had men in their lives who would love and care for them as he had and would be fathers who would keep his grandchildren safe and loved. When Dan was blessed with his four grandchildren, Kannon Turner, Kayden Turner, Lunden Augusta and Peyton Augusta, he was the happiest man in the world. He reveled in the special joys of raising grandchildren. He loved to have quiet, personal talks with each of them, hoping to impart words of wisdom that would help them through their lives. Mission accomplished Grandpa! Dan and Lari were a loving and devoted couple. They were so fortunate to spend 38 wonderful years together. Those years were filled with the joy of raising children and grandchildren, attending their daughters’ activities and events and then later the activities of their grandchildren. They shared a passion for history and took several trips exploring archaeological sites. They shared a love of gardening and the precious birds and squirrels that would visit their back yard daily, knowing Dan was always there with peanuts!! It was a life filled with loving family, joy, kindness and lots of laughter. Dan was preceded in death by his dear mother and father, Don Mathewson and Avis (Maddy) Mathewson. Dan is survived by his loving spouse, Lari Mathewson, his precious children and son-in-laws, Michale Chambers, Cody (Chambers) Augusta and Rafael Augusta, Casey (Chambers) Turner and Corren Turner and the grandchildren who were so dear to him, Kannon Turner, Kayden Turner, Lunden Augusta and Peyton Augusta. He is also survived by his brother-in-law, Conrad McCarter (Maggie Salazar), with whom he had a very special friendship, and his dear cousins Jim Nye (Nan) and Duane Maddy as well as many additional cousins. Dan requested a private family graveside service which was held May 19, 2022 at Grandview Cemetery in Fort Collins Colorado.

Our very dear husband, father and grandfather, Dan Mathewson, passed away on May 13, 2022 after a year long battle with several health issues. Dan fought hard this past year to try to stay with his family and tried every intervention possible... View Obituary & Service Information

The family of Dan Leroy Mathewson created this Life Tributes page to make it easy to share your memories.

Send flowers to the Mathewson family.