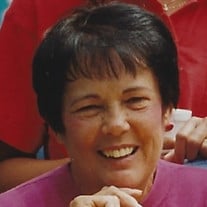 Gwen Bohlender, 87, of Fort Collins, died September 28, 2020 at her son’s home. Gwen was born July 20, 1933 in St. Paul, Alberta, Canada to Henry Wesley Walker and Margaret Alice Chater Walker. When she was a child, Gwen’s family moved to Missouri before settling in Greeley, CO. Gwen graduated from Campion Academy in Loveland, CO in 1953. She followed the teachings of the Seventh-day Adventist Church all of her life. After high school she planned to pursue her dream and become a nurse. Shortly after enrolling in nursing school, an unfortunate family incident forced her to return to her family to help raise her four brothers and two sisters. During this time she also helped financially support her family by working several part time jobs. She married her husband, Milo Bohlender, in Greeley, on August 15, 1954. Milo and Gwen moved to Fort Collins in 1960 where Gwen continued working part time jobs to support her young family, including hand starching and ironing CSU Veterinarian student’s laboratory coats for .25 cents each. Her first full time job was at Safeway, where she worked as a checker for many years. She then joined her husband, Milo, at Warren Funeral Chapel as a receptionist and secretary. It seems that they were never apart while together at the funeral home. Her children agree they were attached at the hip, working together for over 45 years at Bohlender Funeral Chapel. Her passions included china painting, making porcelain dolls, and collecting Simpich dolls and Hummel figurines. She was a master seamstress and her sewing skills were evident in the handmade clothing that she dressed each of her porcelain dolls in. She loved travelling with friends to Branson, MO and spending time in the mountains up by the Poudre River. She was a huge fan of all sports, but especially loved the Colorado Rockies and CSU athletics. For many years, she sat front and center with her husband Milo at CSU Basketball games. Survivors include a daughter Vaundeen Bachus and her husband Dr. Kevin Bachus; a son Gary Bohlender and his wife Kristin, all of Fort Collins; a sister, Iris Langston of Alamosa, CO; and two grandchildren, Scout and Stella Bohlender, both of Fort Collins. Preceding Gwen in death are her parents; four brothers, LaVerne, Bernard, Russell, and Franklin Walker; a sister, Maurine Tidquist, and her husband, Milo. A visitation will be held from 5 to 7 p.m. on Wednesday, September 30, 2020 at Bohlender Funeral Chapel. Private Entombment will follow on October 1, 2020 at Grandview Cemetery. Gwen’s family would like to thank the staff at New Mercer Commons, Columbine West Health and Rehab Facility, Visiting Angels, and Pathways Hospice for their care, love, and support over the last two years. In lieu of flowers, contributions may be made to Pathways Hospice in care of Bohlender Funeral Chapel, 121 W. Olive St., Ft. Collins, CO 80524.

The family of Cora Gwendolyn Bohlender created this Life Tributes page to make it easy to share your memories.