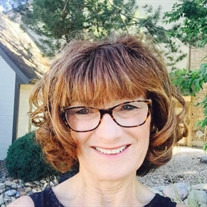 It is with saddened hearts that the family of Cheryl O’Leary announce her passing at the age of 71. Cheryl is survived by her son, Tony Read; her daughter, Andrea Haase and her spouse, Andy; her two granddaughters: Mackenzie and Skylar; two sisters: Jeannie and Kathy; one brother: Charles; former spouse, David; “outlaw”: Anne, as well as other relatives and friends, including her grand dog, Starkey. She is preceded in death by her mother, Anna and her stepfather, John. Cheryl was born in Indiana on January 26, 1948. At a young age, she moved to California, graduating from high school in Lancaster. From there, she moved to Los Angeles to work for Congressman Alphonso Bell Jr., then AT&T, later becoming Lucent Technologies in Network Systems Sales from where she retired. In 1969, Cheryl married David Read, who is the father of Andrea and Tony. This marriage lasted 27 years, moving from California to Missouri, back to California, then eventually to Colorado with David and the kids. David remained very supportive as a father and friend up to her death. A short stay in New Jersey with her job also resulted in supporting her future son-in-law, Andy. He was a player of the New York Giants. She let Andy and a teammate live with her, took him to training camp as well as cooking for them. A favorite dish was Chicken Rolls! Cheryl was a dedicated mother, grandmother, sister, and friend. Her love of outdoors showed in all the things she enjoyed: biking, hiking, running races including marathons. Reading and watching sports were passions of Cheryl’s. She never missed any of the many activities her children as well as her grandchildren were participating in: dance recitals of Andrea’s, dance team performances for both Andrea and the granddaughters, tennis and lacrosse matches of Tony’s, all school activities for all the kids, soccer practices and many games of her granddaughters’. When Mackenzie and Skylar were babies and up to school age, Cheryl would drive from Centennial, Colorado to Fort Collins, Colorado each day to care for them. To tell of Cheryl, one would have to continue to mention how she always put others ahead of herself. There are fond memories of all the caregiving she gave to her loved ones, including her Mom who battled cancer, who Cheryl took care of up to her death, her son Tony who struggled through diabetes, kidney failure, and a double organ transplant, supporting him every step of the way. In 2017, while out running, something she loved to do, she began noticing weakness in her legs. It was later diagnosed as ALS (Lou Gehrig’s Disease). She will be remembered as facing this horrible disease with a positive attitude, brave faith, and all the while, still worrying about her family whom she loved very much. Cheryl will be dearly missed. If you would like to make a donation in honor of Cheryl please do so at www.alsa.org. A Memorial Mass and Reception celebrating our mom will be held on November 4, 2019 at 2 PM at Saint Joseph Catholic Church, 300 W. Mountain Ave., Fort Collins, CO 80521.

It is with saddened hearts that the family of Cheryl O&#8217;Leary announce her passing at the age of 71. Cheryl is survived by her son, Tony Read; her daughter, Andrea Haase and her spouse, Andy; her two granddaughters: Mackenzie and Skylar;... View Obituary & Service Information

The family of Cheryl Ann O’Leary created this Life Tributes page to make it easy to share your memories.

It is with saddened hearts that the family of Cheryl O’Leary...

Send flowers to the O’Leary family.