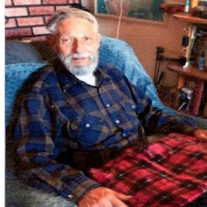 Charles LeRoy Wilkins, Sr. an innovative machinist and life-long resident in the LaPorte area died peacefully on February 13, 2021 at the age of 84. Charlie is survived by his wife, Evelyn Jane (Blehm) Wilkins of 63 years of marriage. He is survived by his brother, Walter and sister-in-law Betty (Wilkins) Hout. His daughter, Dianna (Wilkins) Moses and son-in-law, Joseph Moses of Loveland, CO, His Daughter, Connie (Wilkins) Ruff and son Charles L. Wilkins, Jr (CJ) and daughter-in-law Sheila Wilkins. Charlie is survived by six grandsons and six great grandchildren and many extended family members. His infant son, William Roy, his parents; Roy and Bertha, his brother Delbert (Waxie). nephews and grandson preceded him in death. Charlie was born on February 1, 1937 at home on Edwards Street in Fort Collins, CO. Shortly after he and his family moved to a farm in Waverly. During his "Waverly school days" he played football and basketball. In 1949 he re-located to Seattle, WA. He joined the United States Air Force in 1954 and served with SAC )Strategic Air Command) worldwide. During his service, he photographed still land and airborne subjects, then processed and developed the film. This Process later created topographical maps. His missions were served in aircraft at 40,000 ft. He flew in RB-47's and across the Atlantic in C-54's. Later, Charlie served in the naval reserves in the photo lab. Charlie worked in successful careers throughout his life. He was a machinist at Woodward Governors', a time at Ideal Cement Company, Heath Engineering, filling stations servicing cars, Kodak and Colorado State University (Atmospheric Science Department) as an Instrument Maker Fabricator and weather research engineer. During his time at CSU, he was fortunate to fly in several aircraft during the weather research projects. The aircraft included T-28, Queen Aire, McDonnell F-101B (Grey Ghost) and a Cessna 207. He was invited to 'work" as NASA on the 141 Flying Observatory Galileo II. The weather research projects took him "around the world to China, Saudi Arabia, and then many places in the United States. Charlie was a true enthusiast! He had many interests, collections, and hobbies. He was a collector of barb wire, insulators, and guns. His hobby of Classic cars and participation in car shows filled his retirement days. Happy retirement days were filled with the excitement and pleasure of spending time in LeFors, TX. The home was enjoyed by many visitors, who traveled south to visit. In Texas, he was an active member of the LeFors community by helping around the town and volunteering with the local Fire Department. Charlie shared his love for the Colorado mountains by spending time with his family and friends camping and hunting. His recent favorite backyard activity was to feed his "girls" - the deer that roamed in his pasture. He loved the mountains and watching the wildlife around his home. Charlie (aka Chuck, Charles, Uncle Charlie, Dad, and Grandpa) will be deeply missed by his family and friends who knew and loved visiting with him. At 1:00pm on Wednesday, July 7th Relatives and Friends are welcome to gather at Bohlender Funeral Home for the procession of Charlie’s ashes to Grandview Cemetery Memory Wall and Ossuary . Following the service at Grandview, everyone is welcome to go to The Laporte Presbyterian Church in Laporte for refreshments. Flowers, donations and condolences may be offered at www.bohlenderfuneralchapel.com.

Charles LeRoy Wilkins, Sr. an innovative machinist and life-long resident in the LaPorte area died peacefully on February 13, 2021 at the age of 84. Charlie is survived by his wife, Evelyn Jane (Blehm) Wilkins of 63 years of marriage. He... View Obituary & Service Information

The family of Charles L Wilkins, Sr created this Life Tributes page to make it easy to share your memories.

Send flowers to the Wilkins family.