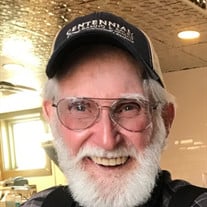 Charles Thomas “Tom” Marsh (or as many called him, “Swampy”) was born in Greeley, Colorado to John Thomas Marsh and Mayme Frances Sorrels on June 25, 1940. Tom was what some might call a “bad boy” right from the start. Fast cars, slicked back hair, and testing the limits was how he lived his life. Tom enjoyed having fun, drinking whiskey, and telling stories. He was also an “accident waiting to happen,” incurring many injuries and racking up innumerable surgeries and stints in the hospital. Tom operated heavy equipment most of his life, spending his time on a crusher, driving a scraper, or driving a snow plow in the deep dark depths of the night. He spent his early years managing and working at numerous car washes and liquor stores. Tom was also a skilled mechanic, and his love and passion for cars was steadfast from the beginning. At Fort Collins High School, he met and fell in love with the love of his life, Karin Wolfe. Each had their respective adventures to go on before they actually married. When they did marry, they came together as a blended family, each having had a son. Three years later a daughter was born, and the five of them became a tight unit. The couple spent their years together working numerous jobs and watching their kids at various sporting events. After “retirement” (a constant putterer and worker), Tom decided to stick close to Karin and worked as a custodian at her place of employment, Plymouth Congregational Church. Anyone who knew Tom (and that was just about everyone) knew that he was ornery, sassy, an insanely hard worker, honest, and a man of his word. He had a wicked sense of humor, and many of his friends can attest to this, his favorite greeting for friends was often his “one finger salute”. His greatest joy were his kids and his grandkids, his 1967 Mustang, and of course, his wife Karin. Preceded in death by his parents, his brothers Bob (Betty) and Dick (Dot) Marsh, his son-in-law, Steve Hawes, and his wife, Karin (Wolfe) Marsh. He leaves behind five nephews he cherished: Jerry (Nancine) Marsh, Dean Marsh, Jack (Debbie) Marsh, Terry Marsh, and Rob Marsh; his three children, Kevin (Denise) Marsh, Tom (Tara) Marsh, and Shawna; and seven grandchildren (Keely Hickman, Zach Marsh, T Baca-Burrell, Ayden Marsh, Tatum Marsh, Nora and Maile Hawes. He was a dedicated family man through and through and there wasn’t anything he wouldn’t do for friends or family. The world is a better place for having him in it. He left strict instructions that he didn’t want a funeral or service, rather a party at the American Legion in LaPorte with plenty of Jim Beam and Budweiser! When everyone who wants to attend can, we will all get together and celebrate one hell of a man. Thank you to everyone who helped and showed friendship to “Swampy” over the years, he loved you all! In lieu of flowers please make a donation to the charity of your choice.

The family of Charles Thomas Marsh created this Life Tributes page to make it easy to share your memories.

Send flowers to the Marsh family.