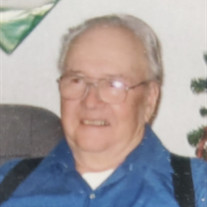 ​Charles Dwayne Hodges was born February 27th, 1937 in Loveland, Co. to Lloyd and Hazel Hodges of Wellington, Co. who are now deceased. ​Dwayne passed away at his home in Wellington, Co. at the age of 84 on August 25th, 2019. ​Dwayne suffered from a lung condition and rheumatoid arthritis along with numerous health complications. ​He is survived by his Wife of 63 years Verda Hodges of Wellington, Colorado, Son Steve Hodges or Fort Collins, Colorado, Daughter Dawna Sakala of Wellington and Larry Sakala of Fort Collins, Co., Grandsons Brandon Sakala of Wellington, Colorado, Josh Sakala of Omaha, Nebraska and his wife Katie, Great grandchildren Trent 13, Brooke 7, Owen 5 and Luna 3 months. ​Dwayne is also survived by sister Beverly Anderson of Fort Collins, Brother Marvin (Marilyn) Hodges of Fort Collins, Sister Sharon (Bruce) Michael of Fort Collins. ​Preceded in death are his brother Darrel Hodges and sister Charlene Glass and her husband Herman. ​Dwayne was a carpenter by trade and contributed to the building of many churches, homes and business in the Fort Collins area. ​Building and creating things was a hobby along with being a master mechanic building two trikes from scratch and rebuilding a dune buggy which were enjoyed by him and his grandsons and Wife. ​Dwayne has given us all so much love, friendship and compassion over the years. His wonderful sense of humor has lifted our hearts in so many ways. He will be dearly missed. ​Memorial Service will be held at Bohlender funeral Chapel in Fort Collins, Co. on September 20th, 2019. At 11:00 AM. Interment will follow at Resthaven Memory Gardens Cemetery. Luncheon at Timberline Church following Cemetery service.

The family of Charles Dwayne Hodges created this Life Tributes page to make it easy to share your memories.

Send flowers to the Hodges family.