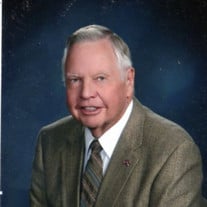 Charles (Chuck) William Hagemeister was born on December 7, 1931 in Fort Collins, Colorado and passed away on December 25, 2019. Chuck married the love of his life Pearl on June 25, 1988 and they shared their blessed life together for over 31 years. He was a native of Fort Collins from a prominent pioneer family. Having lived here for 88 years, he had deep roots in the city. His Grandfather was known as the father of the sheep feeding industry in this area and was involved in oil and gas drilling in north Fort Collins. In 1950 Charles graduated from Fort Collins High School. After attending Colorado State University, then known as Colorado A&M, for one quarter, Chuck left to serve his country in the Korean War. He was sent to Biloxi, MS with his Air National Guard Unit and was trained as a radar operator. During activation as part of the Air Force, Chuck was released due to an old back injury. He returned to Fort Collins, joining the Fort Collins Police Department as a patrolman and resigned as a Detective Sergeant in 1962 to complete his degree at Colorado A&M. He then went on to earn a BS in Social Studies, Guidance Counseling, and later an Administration Certificate from Colorado State University. After graduation, Chuck served as a teacher, counselor, and assistant principal for 23 years. He was also an exchange teacher and chairperson for the reading program at Kamehameha Schools Honolulu, HI. He also served as president of the Poudre Education Association and Phi Kappa Delta, an honorary education society. Chuck then worked as a Juvenile Investigator for 12 years for the Larimer County District Attorney's Office, retiring in 2000. Chuck's numerous civic activities included chairman of the Fort Collins Discovery Center Advisory Council, founder of the Fort Collins Historical Society, served as the History Committee Chairman of the Fort Collins Centennial Bi-Centennial in 1976, life member of the Elks Lodge #804, member and past vice-president of the Fort Collins Municipal Railway Society, and he most recently was presented a beautiful plaque honoring him as a dear friend and founding member of the Northern Colorado Model Railroad Club. Chuck and his wife Pearl were active members of First Presbyterian Church, having served as ushers and greeters over the years. Survivors include his loving wife, Pearl Ann, affectionately called "the jewel of his life." His is also survived by his daughter Pamela Hanson-Medina, one granddaughter, two grandsons, one great granddaughter, one great grandson, one step-son, one sister-in-law, and many nieces and nephews. Chuck is predeceased by two step-daughters, and his brother Howard. Many friends and neighbors are serving as advocates. Services will be held Tuesday, December 31st, at 10:00 AM, at First Presbyterian Church, 531 South College Ave. Entombment will follow at 12:30 PM at Grandview Cemetery. Contributions can be made to the Fort Collins Museum of Discovery, or charity of your choice.

Charles (Chuck) William Hagemeister was born on December 7, 1931 in Fort Collins, Colorado and passed away on December 25, 2019. Chuck married the love of his life Pearl on June 25, 1988 and they shared their blessed life together for over... View Obituary & Service Information

The family of Charles William Hagemeister created this Life Tributes page to make it easy to share your memories.

Send flowers to the Hagemeister family.