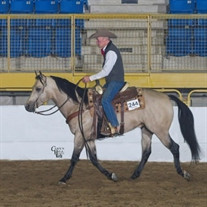 Charles Thomas "Tom" Ball, 78 of Ft. Collins passed away suddenly on March 18, 2021. Tom was born on November 17, 1942 in Gallipolis, Ohio to William Wayne Ball and Margaret Louise Irion Ball. Tom received his Bachelor's degree in Agriculture, two Masters degrees in Education and Nutrition, and received additional education in Equine breeding. The Cherry Creek School District is where Tom began his teaching career and he later became the Director of Vocational Agriculture. He was not only an instructor but the manager of the farm, which served as a hands on learning experience for students interested in agriculture and farming, He served as an instructor and facilitated the start of one of the first accredited Equine Programs in the country at Lamar Community College. He formed a horse show team as part of the program. After leaving education, he became one of the nation’s top salesmen and nutritionists for Manna Pro, earning national honors for three years as Salesman of the Year. Tom was also the general manager and breeding manager for the family business, Ball’s Quarter Horses as well as a trainer and instructor. Always willing to share his knowledge, he would speak to equine groups and individuals. Most recently, he spoke to equine classes at the University of Wyoming. Throughout Tom's career as a trainer, he broke young horses and trained horses for high levels of competition including: The All American Quarter Horse Congress, the American Quarter Horse World Championship Show, Palomino Horse Breeders of America World Championship show. Tom's articles were featured in The Quarter Horse Journal, Western Horseman, Ride with Bob Avila and the book, Breeding for Success. He was a lifelong member of the American Quarter Horse Association and also a former International Buckskin Horse Association and Palomino Breeders of America accredited judge, judging horse shows across the nation. Tom was also the past President of the Colorado Palomino Exhibitors Association and Vice President and Youth Advisor for the Rocky Mountain Quarter Horse association. Tom loved all animals and took meticulous care of the horses, dogs, and cats and will be remembered for his compassion for the animals under his care. Survivors include his two siblings Margo Lea Ball and Wayne Ball, Jr. both of Ft. Collins. A Graveside Service will be held at 1 p.m. Tuesday, April 6, 2021 at Grandview Cemetery. Immediately following the graveside everyone is invited to a Celebration of Tom's Life at the family Ranch.

The family of Charles Thomas Ball created this Life Tributes page to make it easy to share your memories.

Send flowers to the Ball family.