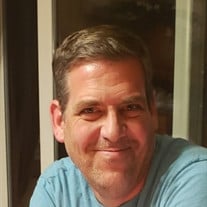 On Tuesday, March 31, 2020, Brian Loren Garrett, loving husband and father of four children, passed away due to complications of COVID-19 at the age of 45 in Fort Collins, Colorado. Brian was born on October 22, 1974 in Simi Valley, California to Dave and Glonda (Tidwell) Garrett. He attended Simi Valley High School before graduating from Rocky Mountain High School in Fort Collins in 1993. After high school, Brian spent three years living in Columbia and developed a love for the people and culture of the country. Once he returned home, Brian attended Colorado State University. On August 3, 2006, he married his loving wife Rebecca Fox. For fourteen years, Brian worked for Columbine Health Systems in the transportation department. He thoroughly enjoyed his interactions with his co-workers and the residents he served. He deeply respected the residents and treated them as his own family. Brian loved sports. He fondly recalled his youthful experiences on the soccer pitch, baseball diamond, and volleyball court in vivid detail. He avidly followed all local teams and his childhood favorites, the Dodgers and the Raiders. His knowledge of sports was encyclopedic; no one ever needed to look up a sports fact with Brian near. At 6’ 5”, Brian was a presence when he walked into any room. Despite his imposing stature, Brian was a gentle giant. Brian loved people; he was genuine and sincere with everyone he met. He had a kind heart and cared deeply for all. Brian was always concerned about the well-being of others. If someone needed help, they could count on Brian. He always had a big smile and a big hug. He loved to share funny stories, jokes, and his laugh was contagious. The greatest passion of Brian’s life was his family. He loved his wife Rebecca deeply and together they spent 14 years not only being partners, but best friends. His gentle nature was most on display with his beloved children. He would do anything to make them happy. Nothing could make him smile more or his green eyes twinkle like being in the company of his children. Brian is survived by his wife, Rebecca Garrett; three daughters, Savannah Garrett, Emilie Garrett, Grace Garrett; son, Graham Garrett; his parents, Dave and Glonda Garrett; three sisters, Debbie (Bret) Guthrie, Janice (Jon) Kovach, Susan (Todd) Kahl; brother, David (Debbie) Garrett; his in-laws; and many nieces, nephews, great-nieces, and great-nephews. A private graveside service will be held. A celebration of life will be held at a later date. Donations to contribute to the education of Brian’s children may be sent in care of Bohlender Funeral Chapel. The family wants to offer their gratitude to the courageous and dedicated medical team at Poudre Valley Hospital for the care and support they provided Brian in his final days.

On Tuesday, March 31, 2020, Brian Loren Garrett, loving husband and father of four children, passed away due to complications of COVID-19 at the age of 45 in Fort Collins, Colorado. Brian was born on October 22, 1974 in Simi Valley, California... View Obituary & Service Information

The family of Brian Loren Garrett created this Life Tributes page to make it easy to share your memories.

Send flowers to the Garrett family.