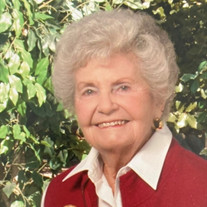 Betty J. Taylor-Vineyard, 99, of Parker, passed away on Thursday April 14th, 2022 at Parker Adventist Hospital. A memorial service will be held on Saturday, May 7th at Parker United Methodist Church at 10:30 a.m. Pastor Cody Anderson will officiate. Internment will take place at Roselawn Cemetery in Fort Collins on Monday May 9th at 11:00 a.m. with Pastor Richard Brest officiating. Betty was born on Sept. 17th 1922 in Newcastle, Wyo. to parents Karl Kipping and Leitha “Granger” Kipping (Kraxberger). She attended schools in Wyoming and Idaho and graduated from high school in Boise in 1940. She then attended Boise Junior College. During WWII, Betty worked for Morrison-Knutson Construction Company in Pocatello. Betty married Walter Taylor in 1947 in Ft. Collins. Betty worked at several different jobs, while Walt studied for his master’s degree in Vocational Agriculture at Colo A&M. The couple then moved to Center, Co. where Walt was employed as a Vocational Agriculture teacher. Walt and Betty later moved to Ft. Collins for a short period. They then settled in Brighton, where Walt taught Vocational Agriculture for 26 years. During that time, Betty was employed with the Daniel, McCain and Brown law firm and later as a clerk with the 17th Judicial District in Brighton. She was also a member of PEO Sisterhood for 65 years. As a child, Betty loved camping with her widowed mother and brother Paul. She loved sleeping under the stars on pine boughs! As a young mother, Betty especially enjoyed a trip to Yellowstone, where she watched a Grizzly bear across the meadow run toward her three youngest – Susan, Debbie and Kevin! Fortunately, all made it safely to the cabin! The bear later stood on the porch but fortunately didn’t break in! Betty and Walt loved the outdoors and built a cabin up the Poudre River where they especially loved spending weekends and holidays. Betty loved life, family, friends, big band music, reading and the Colorado Rockies! She loved dressing up for Halloween and other parties. She never met a stranger and was always vibrant and outgoing. She had a great sense of humor and always had a positive attitude. Betty never spoke badly of anyone. She couldn’t stand bragging and boastfulness. After retiring, She and Walt wintered in Mesa, AZ. where Betty enjoyed taking pottery and jewelry classes, and attending dances at the RV Park they called their winter home. She was a member of Prime Timers at the park and was always helping with meals and activities. In 1999, Betty married Glen Vineyard in Puerto Vallarta, Mexico! They enjoyed remodeling their home in Parker and taking trips together. In her later years, Betty enjoyed a very special relationship with her dear friend Doug Carr of Loveland. They enjoyed each other’s company in both Colorado in the summer and Arizona in the winter. Betty is survived by her older brother Paul Kipping of Ft. Collins and by her 3 children – Dave (and Lois) of Scottsdale, AZ., Debbie Littlefield (and Mike) of Elizabeth, CO. and Kevin (and Mari) of Bouquete, Panama. She had 13 grandchildren and 21 great grandchildren at the time of her passing. Betty was preceded in death by her daughter Susan Mitchell (and Ev), her husbands Walt and Glen and her special friend Doug Carr. She was a member of Parker United Methodist Church and had a strong abiding Christian faith. In lieu of flowers, memorial gifts may be made to a charity of choice.

Betty J. Taylor-Vineyard, 99, of Parker, passed away on Thursday April 14th, 2022 at Parker Adventist Hospital. A memorial service will be held on Saturday, May 7th at Parker United Methodist Church at 10:30 a.m. Pastor Cody Anderson will... View Obituary & Service Information

The family of Betty Jean Taylor-Vineyard created this Life Tributes page to make it easy to share your memories.

Betty J. Taylor-Vineyard, 99, of Parker, passed away on Thursday...

Send flowers to the Taylor-Vineyard family.