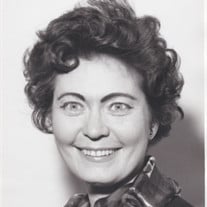 Betty A. Bay, 93, passed away on February 13, 2020, in Fort Collins. Born in Trenton, Missouri, to Rex and Lela Elledge, Betty graduated from Trenton High School. At age 19, she began her career in journalism as the editor of her local newspaper, the Trenton Republican Times. In 1948, she married Michael Bay, Jr, also of Trenton. Betty received a BS in home economics and journalism from Iowa State University. She proceeded to have a remarkable career for a woman of her time. She spent several years as an Associate Editor of Better Homes and Garden magazine before moving to Washington, D.C., where she worked in the office of Consumer Affairs. Betty was personally responsible for a nationwide program of bringing the benefits of the Consumer Affairs department to all the states. She created a quick credit guide for people to learn how credit works, which was available at all post offices for many years. Betty was also instrumental in getting care instructions put on tags in clothing. Some of her work is at the Harvard Radcliffe Library, which specializes in women’s studies. She continued to use her creative writing abilities after retirement when Betty and her husband Mike moved to Brownsville, Texas, where she wrote the book “Historic Brownsville”, a fundraiser for their library. After moving to San Diego, she published a fundraising cookbook for Meals on Wheels, which received a national award. She also served on the board of the Friends of California Libraries and was a lifelong member of the Methodist church. Betty moved to Fort Collins in 2012 after the death of her husband, and in 2014 she was selected as one of 41 Northern Colorado Super Women in the Fort Collins Mind and Body magazine. She constantly encouraged her great-nephews and nieces to pursue their creative expression in following their personal career paths. Betty will be remembered for her witty sense of humor, her original poetry, and her love for her husband and extended family. Betty was preceded in death by her parents, husband, and two brothers-in-law, Ovid Bay and Webster Bay. She is survived by a brother-in-law, Carroll Bay of LaGrange, Illinois, and two nieces, Mary Carroll (George) Dougherty of LaGrange, Illinois, and Michelle (Art) Hunter of Fort Collins and their families. A memorial service will be held at a future date in San Diego. In lieu of flowers, donations can be made to First United Methodist Church Fort Collins, 1005 Stover St., Fort Collins CO 80524 or Meals on Wheels, 1217 E. Elizabeth St., #11, Fort Collins CO 80524. Our deepest gratitude goes to the staffs of Brookdale Assisted Living and Suncrest Hospice for their kindness and care of Betty.

Betty A. Bay, 93, passed away on February 13, 2020, in Fort Collins. Born in Trenton, Missouri, to Rex and Lela Elledge, Betty graduated from Trenton High School. At age 19, she began her career in journalism as the editor of her local newspaper,... View Obituary & Service Information

The family of Betty Ann Bay created this Life Tributes page to make it easy to share your memories.

Send flowers to the Bay family.